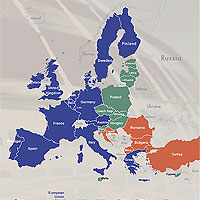 (Interfax – MOSCOW, September 9, 2013) Russia was subject to 74 trade restrictions imposed by 17 countries as of September 1.

Likhachev said anti-dumping proceedings in the EU against Russian goods were particularly noteworthy as the EU disregards the price of gas in Russia and uses its own gas prices for calculating the cost of goods in Russia, and the Econ Ministry is thinking of filing a complaint with the World Trade Organization (WTO) against the EU in connection with this.

“In this context fail the problems that Russian manufacturers are still facing in anti-dumping procedures in the EU cannot go without mention. When calculating its anti-dumping margin, the EU is still adjusting prices for Russian energy (gas) in the price of the end product. We’re thinking of moving this discussion to the WTO agency for resolving disputes,” the Econ Ministry said in materials for the briefing.

Another seven new investigations are under way. They include three anti-dumping probes: Brazil for bus tyres, initiated in June 2013; India for pentaerythritol (June 2013); and the United States for ferrosilicon (July 2013). They also include four special safeguard measures: India against sodium nitrate and seamless pipes, and steel sections, initiated in April 2013; Kyrgyzstan for wheat flour (July 2013) and Thailand for flat hot-rolled products from unalloyed steel (November 2012). In addition, ten existing anti-dumping measures are being reviewed.

“The damages [from all existing measures] are, experts estimate, between $1 billion and $1.5 billion,” Likhachev said.

Most of the trade restrictions are in force in the EU, Ukraine, United States and Belarus and most of them apply to metallurgical and mineral fertilizer exports.

Likhachev said the Econ Ministry last year succeeded in getting 16 trade restrictions against Russian goods lifted, averting more than $1 billion in damages, and five measures and more than $155 million in H1 2013.

He said Russia’s accession to the WTO helped to lift some restrictions automatically as they did not comply with WTO regulations. They include quotas for imports of Russian steel products to the EU, alcohol product imports to Kyrgyzstan and special measures against flat glass imports to Turkey.

“Regarding all other measures, painstaking work is being carried out with Russian manufacturers on the arguments that prove restrictions imposed by other countries are discriminatory and incompatible with the organization’s rules,” Likhachev said.