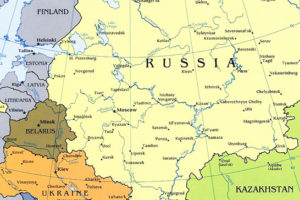 (Moscow Times – themoscowtimes.com – Ivan Nechepurenko – June 10, 2014) Bulgaria’s decision to suspend construction of the Russia-led South Stream pipeline project on its territory, undermining Russia’s efforts to diversify its gas transportation infrastructure to Europe away from Ukraine, is an underhanded economic sanction thrust on Russia by the West, a top Russian diplomat and Russian industry analysts said Monday.

Vladimir Chizhov, Russia’s envoy to the European Union, slammed the move against the $45 billion pipeline project, which followed a visit by three U.S. senators to Bulgaria late last week, as “economic sanctions by stealth,” and highlighted efforts by top European officials to link the continuation of work on the project with Russia’s position on Ukraine.

“South Stream is directly related to Ukraine, because once it is completed, Ukraine will loose its status as monopoly transit country [for the Russian gas going to European consumers],” Chizhov said, Itar-Tass reported.

South Stream, which is designed to deliver 63 billion cubic meters of gas per year and from Russia’s Krasnodar region across the bottom of the Black Sea to Bulgaria, Serbia and Hungary before entering Austria, has the potential to shift the balance of energy power in Eastern Europe away from Ukraine by depriving the country of its leverage as the main transit country for Russia’s gas.

McCain, who is known for his staunch criticism of President Vladimir Putin, was quoted by The Associated Press as saying after the meeting that “obviously we want as little Russian involvement as possible.”

Bulgarian authorities soon tried to row back on Sunday’s announcement, with the Energy Minister Dragomir Stoynev saying on Monday that the project cannot be cancelled and that it will be completed sooner or later. Serbia – the next leg of the pipeline – said it will still suspend the project until the construction of Bulgaria’s section is sorted out.

The project’s disruption is a direct consequence of Western efforts to preserve Ukraine’s leverage over Moscow as its main transportation hub for gas exports, said Sergei Pikin, director of Energy Development Fund, a Moscow-based energy consultancy and engineering firm.

“If South Stream is completed, it will make Ukraine much weaker with regard to Russia, and of course neither the U.S. nor the EU want this to happen,” Pikin said in a telephone interview on Monday.

Justifying its pressure on Bulgaria, The EU claimed that the country, one of its poorest members, failed to comply with EU internal market rules on the awarding of public contracts. At the end of May, Bulgaria selected Stroytransgaz, a Russian company hit by U.S. sanctions, to construct the pipeline on its territory. Strontransgaz is controlled by Gennady Timchenko, a personal friend and ally of Putin who is subject to U.S. sanctions. Timchenko is not subject to EU sanctions.

The existing pipeline network between Russia and EU is able to carry 250 billion cubic meters of gas, while Russia’s annual exports amounted only to 196 billion cubic meters in 2013 according to Mikhail Krutikhin, a partner at consultants RusEnergy. About 50 percent of Russian gas destined for Europe travels via Ukraine.

Last week, Ukraine’s Prime Minister Arseniy Yatsenyuk said the country’s state-controlled gas company, Naftogaz, would be split into three separate businesses – one to manage Ukraine’s pipeline infrastructure, one to oversee gas transport, and another to take charge of storage. Once split, Ukraine’s gas transportation system would be modernized with the help of European and U.S. investors, Yatsenyuk said.

And the main value of Ukraine’s gas transportation system is that it can transport Russian gas, according to Pikin. If South Stream is completed, this value – and Yatsenyuk’s plans – will be greatly diminished.