(Interfax – June 12, 2014) Moscow welcomes progress in clearing a comprehensive agreement on the Iranian nuclear program before negotiations between the P5+1 group of world powers and Iran in Vienna, Russian Deputy Foreign Minister Sergei Ryabkov said following a meeting with an Iranian delegation in Rome.

“I can say in summing up the results that the work on a comprehensive resolution of the problems related to the Iranian nuclear program is moving ahead. Following today’s conversation, we have some positive expectations in the run-up to another negotiating round to start in Vienna on Monday,” Ryabkov said. 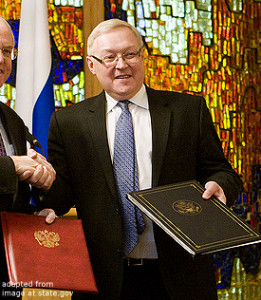 “Our meeting with the Iranians didn’t envision any particular decisions concerning the text [of the agreement], and we didn’t look at the wordings – this is done in a general format. The objective was to determine where there are opportunities for progress at the next round and where there could be serious problems. More prospects have come into view concerning some aspects of the negotiating process,” Ryabkov said.

Following the discussions in Rome, some issues will be “scrutinized at home, and we will be dealing with them during the weekend before the [negotiating] round,” Ryabkov said.

“Possibly what we will do could help the entire P5+1 group and the Iranians formulate something at the next round that would be included in a future agreement,” he added.

However, the matter does not concern “the main aspects,” Ryabkov said. “Anyway, we are already crossing the boundary between mere discussions and a search for concrete solutions. This is the reason why I feel some extra optimism,” he said.