Russia Looks to Washington for Help in Libya 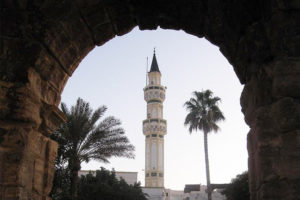 Sergey Lavrov, the Russian foreign minister, said Wednesday that he would welcome any efforts by Washington to use its influence on Turkey to help fashion a truce in Libya, where Ankara and Moscow are backing opposing sides and appear to be at increasing odds.

Turkey dismissed last week an Egyptian-backed cease-fire offered on behalf of General Khalifa Haftar. Turkish Foreign Minister Mevlut Cavusoglu scoffed that the general only wanted a truce because he was now losing on the battlefield. He said that as far as Ankara was concerned, the cease-fire initiative, broached by Egypt’s President Abdel-Fattah el-Sissi, another Haftar backer, was “stillborn.”

The Moscow-backed renegade warlord’s eastern-based forces last month had to lift their 14-month siege of the Libyan capital, Tripoli, following a massive, game-changing increase in military support by Turkey for the internationally recognized Government of National Accord, or GNA.

Lavrov and Russia’s defense minister canceled on short notice a planned visit Sunday to Turkey to try to thrash out a cease-fire deal. Some Western diplomats interpret Lavrov’s appeal to Washington, an about-turn by Russia’s foreign minister, who in the past has criticized any Western involvement in Libya, as a sign of mounting exasperation in Moscow over the reversal of Haftar’s fortunes on the battlefield.

The GNA is now threatening to move into Haftar’s eastern territory, and it is pressing home an assault on the coastal city of Sirte, located between Tripoli and Benghazi, the general’s stronghold.

As the Libyan conflict rages, more foreign actors have been drawn into the fighting between the U.N.-recognized government of Fayez al-Sarraj and forces loyal to Haftar, who has the backing of the United Arab Emirates, Saudi Arabia and Egypt, as well as Russia and to a lesser extent France.

But Russia and Turkey have emerged as the key arbiters in Libya – much as they have in Syria – with reputation, clout, and potential oil and commercial deals at stake.

Forging postwar futures for either country that balance the interests of both Moscow and Ankara is proving highly elusive – and is not being helped by the capricious nature of their clients in both countries.

In Libya’s case, Moscow is thought to have doubted the wisdom of Haftar’s decision to launch a military offensive on Tripoli.

The latest phase of the long-running turmoil in Libya that followed the 2011 ouster of then-dictator Moammar Gadhafi has seen accusations of grave human rights violations leveled against both sides.

The United Nations raised the alarm Tuesday about the mistreatment of a large group of Egyptian migrant workers in Libya by GNA forces after graphic footage emerged on social media showing militiamen abusing scores of the workers captured in the western city of Tarhuna, 90 kilometers from Tripoli.

Last week, 11 grisly mass graves also were discovered in Tarhuna, following the withdrawal from the town by Haftar’s forces, including an estimated 2,500 Russian mercenaries deployed in Libya by the Kremlin-tied Wagner Group. More than 150 bodies, including women and children, were exhumed, prompting widespread calls for the United Nations to instruct the International Criminal Court to investigate.

Analysts say it is unclear what Russia considers a territorial red line, which if crossed could see Moscow upping the military ante and dispatching more “mercenaries” to Libya to match Turkey’s mercenaries recruited from rebel militias in northern Syria. “Where is the line, the line Moscow won’t tolerate the GNA crossing? Is it Sirte? It isn’t clear,” said Sergey Sukhankin, an analyst at the Jamestown Foundation, a think tank in Washington.

Speaking during a round-table discussion hosted by the Jamestown Foundation on the prospects of peace in Libya, Sukhankin said, “Russia is not interested in an ultimate victory of either side” in Libya, including a win for Haftar. “If either [warring] party gains a military victory in Libya, Russia could be sidelined or marginalized,” he said.

Moscow’s interest is in a “frozen conflict,” he and other observers said, which would allow it to remain a “meaningful player” in a partitioned Libya.

But the GNA appears keen to press home its military advantage, and al-Serraj has talked of the importance to fight “for the whole of the homeland.”

Smelling the chance of victory, it may be impossible for the GNA to resist the temptation to go farther east than Sirte, according to Jalel Harchaoui, an analyst at the Clingendael Institute, an international affairs policy group in The Hague. “The Turkish military command feels it has the momentum,” he said.

That risks a rupture between Moscow and Ankara. Both have been careful in the past to contain their rivalries in Syria and Libya within an adversarial partnership. Harchaoui said that with Russia and Turkey, “what we have are two states that indeed are acting as rivals in various spaces, whether it is Syria or Libya, but, at the same time, they are too realistic to forget that the connections that link them are vulnerable.” They avoid full-blown enmity, oscillating between “clear, visible coordination” and “slippages, incidents and accidents.”

When it comes to coordination to avoid mishaps, analysts and Western diplomats highlight the withdrawal from Tarhuna last month by roughly 2,000 Russian fighters, a key militia in Haftar’s army, and their redeployment to the nearby town of Bani Walid. They were unmolested as they moved by Turkish drones and GNA militiamen and their Syrian mercenaries.

Lavrov’s appeal Wednesday to Washington for assistance in negotiating a cease-fire in Libya came just days after Turkish President Recep Tayyip Erdogan held a phone call with U.S. President Donald Trump. The Turkish leader said they agreed on “some issues” related to Libya. “A new era between Turkey and the U.S. may start after our phone call,” Erdogan said in an interview with the state broadcaster TRT, without offering any details.

The risks of escalation as fighting rages around Sirte are mounting, diplomats say, especially if GNA seeks to occupy oilfields east of Sirte, or tries to capture an airbase at Jufra.

According to U.S. Africa Command officers, Russia last month dispatched to Libya a dozen advanced MiG-29 warplanes from an air base in Russia. Africom officials said the planes transited through Syria, where they were repainted to hide their Russian markings.