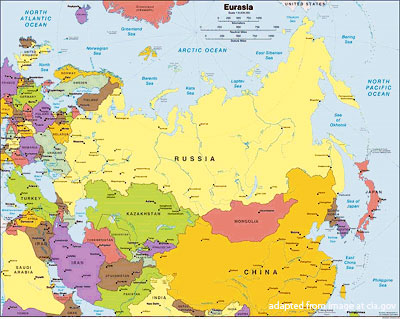 (Interfax – Moscow, June 16, 2014) A decision has been taken at the CSTO [Collective Security Treaty Organization] to suspend attempts to establish dialogue with NATO, and the course has been mapped towards developing cooperation with the OSCE.

“Given the situation, the council of foreign ministers (of the CSTO member states) deemed it advisable to suspend attempts to establish dialogue with NATO. To preserve the field of negotiations in Europe, a course towards further development of interaction with the OSCE was recommended,” CSTO Secretary-General Nikolay Bordyuzha said at the meeting held by State Duma Chairman Sergey Naryshkin with leaders of parliamentary delegations of CSTO member states at the OSCE Parliamentary Assembly on Monday [16 June]. [Passage omitted: repetition]

Bordyuzha informed participants in the meeting about decisions taken at recent meetings of the councils of foreign and defence minsters and the committee of security council secretaries, where pr! oposals on CSTO development were examined and the organization’s areas of activity were adjusted.

“The results of the recent meetings of the charter bodies show that there is a common understanding among the member states of the organization of a firm commitment to collectively overcoming the problems brought about by the currently extremely difficult international situation,” the CSTO secretary-general stressed.

He said that a course “towards strengthening cooperation with the SCO [Shanghai Cooperation Organization] and the Conference on [Interaction and] Confidence-Building Measures [in Asia], and, in the bilateral format, with the People’s Republic of China” had been set out as a priority.

Furthermore, the CSTO secretary-general went on, the need was noted to expand political for international organizations of Latin America and the Caribbean.

Development of relations with Iran, “whose influence in the regions is undisputable, particularly with Af! ghanistan factored in”, merits a special effort, Bordyuzha believes.

Characterizing the current international situation, Bordyuzha noted that powerful political, economic and information pressure on Russia and [other] CSTO member states could be seen from a number of Western states. They practically do not disguise their strategic aims, which, Bordyuzha asserted, involve “further destabilization of the post-Soviet space and break-up of the international collective institutions created there”. The actions of these countries are characterized by “notorious double standards and shameless twisting of facts”, which have become an instrument for forming public opinion about the processes taking place in the world, the organization’s secretary-general said.

“In our view, the world is in effect on the brink of open confrontation,” Bordyuzha said.

He added that a number of countries were practically no longer camouflaging their actions: grossly interfering in the internal affairs of other states, trying to manipulate public opinion, t! o influence their power structures and population economically and financially in order to change the states’ political course and bring pro-Western puppet regimes to power. “The well-drilled know-how of ‘colour revolutions” is widely used. A classic example of such a revolution was the unconstitutional coup in Ukraine, which has now resulted in what is in effect a civil war,” the CSTO secretary-general stressed.

[A later Interfax report quoted Bordyuzha saying that “stepping up joint activities to counter attempts to use ‘colour revolutions’ know-how against CSTO member states” would be one of the most important areas of the organization’s work.

The report also quoting him speaking of the decision to step up work with the new Afghan authorities, in particular, “involving the Afghan side in CSTO’s work in such specific areas as countering drug trafficking, blocking extremist and terrorist groups’ entry into the territory of the member states of the organizati! on, and working together to ensure border security in the collective strengthening of the Tajik-Afghan border”.

The meeting was attended by representative of Armenia, Belarus, Kazakhstan, Tajikistan and Kyrgyzstan, Interfax said.]