Russia’s Prosecutor-General’s Office says it is designating Washington-based think tank the Atlantic Council, formerly run by the U.S. ambassador to Moscow, as an “undesirable” organization, a move that could potentially limit the group’s cooperation with Russian entities and prevent its employees from entering the country.

“Upon reviewing material received on July 25,” the Prosecutor-General’s Office said it decided to recognize the activity of the think tank as “undesirable” in Russia.

The July 25 statement didn’t specify what kind of materials were reviewed.

The reason given was that “activities of this organization pose a fundamental threat to the constitutional order and security” of Russia.

The Atlantic Council is known for taking a critical stance on Russia’s human-rights abuses, its treatment of Ukraine, and widespread public corruption.

Earlier this year, Swedish economist Anders Aslund, who is a resident fellow at the council, published a book that estimated Russian President Vladimir Putin’s wealth at $100 billion-$160 billion.

Aslund also sits on the supervisory board of Ukraine’s state-owned railway monopoly.

The AC said in an e-mail to RFE/RL that “we have seen reports today that the Russian Prosecutor General added the Atlantic Council to its list of ‘undesirable organizations,’ which would mean that our activities had been deemed a threat to the national security of Russia.”

“We have not been informed either formally or informally of the decision by the Russian authorities.

“We are proud of the Council’s long tradition of work with Russians and on Russia, and are disappointed that Russian authorities have announced this step. We are looking into the implications of this decision, which a number of our peer organizations have faced in recent years,” the AC added.

In 2015, Putin signed the “undesirable” law, which has been criticized by human-rights watchdogs, who have said it would “bolster an ongoing draconian crackdown which is squeezing the life out of civil society.”

It is not clear how the law’s provisions will be applied to the Atlantic Council since the group doesn’t have much of a presence in Russia.

The policy center now joins 17 other organizations on Russia’s unwanted list. They include the Ukrainian World Congress, the National Endowment for Democracy, and the German Marshal Fund of the United States. 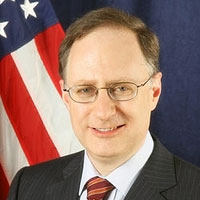 Some of the Atlantic Council’s fellows have ties to Russia and Ukraine and other post-Soviet republics.

Another nonresident fellow, Michael Carpenter, was a foreign-policy adviser to ex-Vice President Joe Biden as well as director for Russia at the National Security Council.

Former U.S. Ambassador to Ukraine John Herbst is the director of the council’s Eurasia Center.

U.S. Ambassador to Russia Jon Huntsman served as chairman of the Atlantic Council from 2014 until 2017, when U.S. President Donald Trump appointed him to his post and the U.S. Senate approved him.