Russia Is an Emerging Superpower in Global Food Supply; Climate change is working against other regions but in favor of the Eurasian Grain Belt. 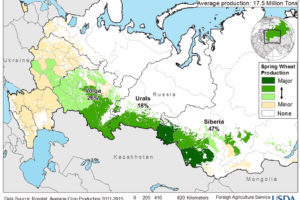 Russia is often seen as a country that produces little that the world wants except energy commodities. The oil export dependence looks like a major time bomb under the country’s future, given the current focus in the West and in China on reducing the use of hydrocarbon fuels. By an ironic quirk, however, Russia appears to be benefiting from the climate change its energy resources are helping to fuel: Its prospects as the world’s biggest wheat exporter and a grain superpower are bright, not least because of the rise in global temperatures.

In the last marketing year, which ran from July 2016 through June 2017, Russia exported 27.8 million metric tons of wheat, more than the entire European Union, to claim first place in the world for the first time since the EU has been counted as a unit. In the current marketing year, the U.S. Department of Agriculture predicts, Russia will export 31.5 million metric tons, increasing its global lead; it’s already facing infrastructure constraints because of the fast growth. It’s also a leading exporter of corn, barley and oats. Along with Ukraine and Kazakhstan, it’s part of the force increasingly shaping global grain markets — RUK, as it is known to market experts.

Alexander Tkachev, Russia’s agriculture minister, has repeatedly said that he sees grain eventually displacing oil as the country’s biggest export revenue source. That’s not a view the Kremlin likes to entertain — it would rather hope for a technology boom — but Tkachev’s prophecy may be more realistic for a number of reasons.

The first two of these are outside of Russia’s purview: The growing global population and climate change. Global grain consumption grew, on average, 2.8 percent a year in 2011-2016, and the International Grains Council predicts 1.4 percent annual increases through 2021. At the same time, climate studies show that, compared to the late 1980s, the time of the Soviet Union’s demise, which depressed Eurasian agriculture for more than a decade, the temperature in Eurasia’s grain-producing areas will increase by up to 1.8 degrees by the 2020s and by up to 3.9 degrees by the 2050s, with the greatest increase in winter. This means a longer growing season and better crop yields. More carbon dioxide in the atmosphere is also good for crops.

The climate factor may already be helping Russia grab new export markets in Asia as U.S., Canadian and Australian rivals suffer from droughts.

Climate change means Russian farms can expand northward, to lands that were never used to grow grain. But more importantly, it will help Russia, and to a lesser extent Ukraine and Kazakhstan, reclaim cropland that has fallen into disuse in 1991 through 2000 — some 140 million acres. Those lands were abandoned in the early years of post-Soviet capitalism because they required too much investment and yielded little if any profit; that’s changing, both for climate-related reasons and with technological advances.

These have been relentless in Russia and the neighboring grain-growing countries in recent years. The Russian capitalist transition and the almost-free but excessively bureaucratized trade in land have created a few dozen large agricultural conglomerates, which have adopted Western technology to increase yields and which have been receiving increased government support since 2005, when the Kremlin declared agriculture a national priority. These vertically integrated giants are both a blessing for Russian exports — they have driven the growth — and a curse. A recent collection of scholarly articles on the Eurasian Wheat Belt pointed out that smaller private farms manage land more efficiently and achieve better crop yields than corporations and recommended that Russia, Ukraine and Kazakhstan reform their land regulations to make it easier for individuals to farm.

Russia has a head start in this, since it liberalized land ownership in the early 2000s. Ukraine doesn’t even have a legal land market today, which should explain its slower grain production growth in recent years. But given that much of the country’s industrial base is now in a war zone, it has to rely more on agriculture; besides, it’s under pressure from the International Monetary Fund to allow the free sale of land. While warmer Ukraine benefits less than Russia from climate change, it still has that huge unused resource.

Together, climate change, population growth, the remaining technological lag between Western and post-Soviet agriculture, and the opportunity to fix regulatory inefficiencies create a huge growth potential for Russia, Ukraine and Kazakhstan. Though their political paths have diverged, these three may, to a degree, share an economic future in the post-oil world.

Of course, a focus on agricultural exports still means a commodity dependence and a vulnerability to global trends in a much less concentrated market than the oil one; Russian wheat sold for more than $350 per ton in 2012, but the price is down to $180 now. Besides, in agriculture growth depends on government support, unlike in the case of hydrocarbons, where the government can passively draw a rent. The export infrastructure, given the Russian state’s hold on transportation, is also a bottleneck that requires taxpayers’ money to remove. But the support may eventually pay a dividend if Russia succeeds in developing higher-margin agricultural production — that of meat, milk and vegetables, which the country still imports. The Russian government has been trying to stimulate that development by putting an embargo on Western products, and it has spurred growth, but so far, Russian producers sorely lack the expertise and resources for a real breakthrough.

Even run by a corrupt, backward-looking, authoritarian regime, Russia remains a country of enormous resilience that shouldn’t be written off as an economic basket case. Its growing importance in the grain markets is evidence of that.