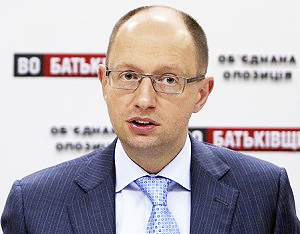 (Moscow Times – themoscowtimes.com – Alexander Panin – May 28, 2014) Acting Ukrainian Prime Minister Arseniy Yatsenyuk said Tuesday that Russia should return the $1 billion worth of gas that he said it stole while annexing Crimea, and accused Moscow of not being trustworthy when it comes to negotiating.

“We would like to hear an explanation from Russia, including the answer to the question of returning the 2.2 billion cubic meters of gas it stole through Chernomorneftegaz on Crimean territory, which is worth $1 billion in Gazprom’s prices,” Yatsenyuk said, the 112 Ukraine television channel reported.

A spokesman for Chernomorneftegaz earlier said the allegation was groundless because the company has the capacity to store a maximum of 1.2 billion cubic meters of gas, adding that as of May 15 it had just 768 million cubic meters.

Gazprom spokesman Sergei Kupriyanov said Tuesday that he had no idea what Yatsenyuk was talking about when accusing Moscow of stealing gas, Reuters reported.

Russia and Ukraine are struggling to agree on a price for future gas supplies. Starting from April 1, the price for Ukraine went from $268.5 to $485 per 1,000 cubic meters, whereas Europe pays $380 on average. The situation is further complicated by Kiev’s unpaid debt for previous supplies, which Gazprom estimates at $3.5 billion. Ukraine earlier accepted that it owes Russia $2.2 billion, but has refused to pay it while the two sides continue to butt heads over the current gas contract.

Yatsenyuk also warned Gazprom that if it does not sign a contract with Naftogaz by Thursday, the companies will have to settle the price dispute at the international arbitration court in Stockholm, Sweden.

However, he said that Ukraine does not trust Russia and has asked for the European Union and the U.S. to act as intermediaries in the gas talks.

“If we sat with them at a table for two they would definitely fool you and then would say everything was as it is, keeping a straight intelligent face,” Yatsenyuk said, Interfax reported Tuesday.

EU Energy Commissioner Günther Oettinger said that Ukraine and Russia had made progress on agreeing a price on Monday and that Kiev has confirmed it would consider paying off $2 billion of its debts by Thursday, possibly leading to further talks on Friday. He also said Ukraine could hand over an additional $500 million in June for gas deliveries in May.

On Monday Ukraine’s state-owned Naftogaz dismissed Oettinger’s comment, saying in a statement that no real progress had been made during Monday’s talks and accusing Russia of sticking to an uncompromising position.

Ukrainian Finance Minister Alexander Shlapak said Tuesday that Ukraine “will not pay anything” for gas until there is a return to the old price it had before April 1, Itar-Tass reported.

A spokesman for Russian Energy Minister Alexander Novak told Interfax on Tuesday that Ukraine should tell the EU no later than Wednesday night whether it intends to pay for the gas. Earlier, Gazprom chief Alexei Miller said that if Ukraine fails to make a pre-payment for June gas supplies, the country will be cut off completely from 10 a.m. on June 3.

In light of the threat to freeze gas supplies to Ukraine, which could endanger deliveries to European suppliers, the European Commission has developed a strategy to enhance the ability of the EU’s energy system to withstand supply disruptions and reduce its energy dependence on external suppliers. The European Commission will adopt the strategy on Wednesday, according to a statement on its website.