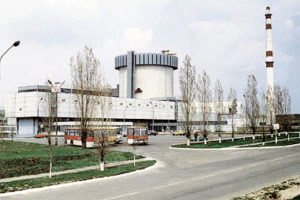 Vladimir Slivyak is the co-chair of the Russian environmental NGO Ecodefense and has been taking part in UN climate change talks since 1995.

The recent St Petersburg International Economic Forum was widely covered by the Russian media, partly because of the eye-catching debates in which president Vladimir Putin himself took part. In the general flood of news from the forum, the presentation given by Alexei Likhachev, the recently appointed head of Russia’s state nuclear corporation, has made few waves.

But Likhachev’s speech is significant in that it reflects a principally new approach to promoting Russian nuclear power plants on the international scene. Russia’s nukes will now be advertised as essential to mitigating climate change.

Rosatom is one of the most important instruments for promoting Russia’s geopolitical interests in other countries. The issue with nuclear power is that when a client country buys a plant, it becomes dependent on fuel supplies, servicing agreements and specialists from the providing country. In almost every case, Russia stimulates interest in these technologies by providing major loans towards plant construction costs. And the list of states where Rosatom is planning to build reactors (among them Belarus, Hungary and Iran) is generally friendly to the Russian regime.

This is the first time that Rosatom has made climate change central to its advertising strategy – unlike its western counterparts, who got hooked on the idea of nuclear power as “climate’s best friend” almost two decades ago. There was a serious message (albeit chiefly an economic one) behind those slogans: at that point, the nuclear energy industry in the west had been in a state of stagnation for many years. Power station construction had ground to a halt almost everywhere, partly due to high costs and partly due to the unresolved issue of nuclear waste.

Increasing concerns about climate change gave the nuclear industry a lifebelt: nuclear reactors, after all, emit hardly any greenhouse gases. However, it was very quickly discovered that this is only half the truth. Berlin’s Öko-Institute calculated that if you look at the complete fuel cycle (from extracting uranium to storing and reprocessing radioactive waste), the emission levels of nuclear power plants were close to those of modern gas technology. The main reason for this is the enormously energy intensive process used to enrich uranium. Attempts to solve the economic problems of the nuclear industry at the expense of climate change have stimulated new research, which has led to an interesting conclusion – the use of nuclear power is an incredibly inefficient way of lowering greenhouse gas emissions at a global level.

The main limitation of nuclear power is the fact that it is used almost exclusively to generate electricity, which accounts for less than 25% of global human-made greenhouse gases. Doubling the production of nuclear energy would reduce the emission of these gases by a mere six percent, and then only if they were replacing coal fired power stations. And there would be no benefit at all if it replaced a combination of renewable energy and energy conservation. In that situation, to produce the same six percent reduction in greenhouse gas emissions would require around 500 new reactors on top of the existing ones, as well as more new reactors to replace those being decommissioned: according to the International Atomic Energy Agency nearly 200 existing reactors will be out of service by 2040.

A large modern nuclear reactor costs between five and 15 billion dollars to build, depending on type and manufacturer. This is obviously an enormous amount of money, which doesn’t solve the problem at hand. The Intergovernmental Panel on Climate change (IPCC) believes that in order to avert the most catastrophic consequences of climate change, emissions need to be cut by at least a half by mid-century. So the question is not about new reactors at some stage in the future, but about a strict time limit on their construction. Nuclear power plants take longer to build than any other power stations (about seven to ten years on average) and some reactors, such as the Russian BN-800, the most powerful fast-breeder reactor in the world, have taken around 30 years to come online.

The western nuclear industry’s most serious attempt to raise international finance on the back of the climate change issue was made at the UN-sponsored Hague Climate Change Conference in 2000. It was not a success. Since then, nuclear experts have concentrated their efforts on lobbying national governments – also, as we can see, without success: not a single country has decided to adopt nuclear power as the central element of their anti-climate change policy.

In 2017, Rosatom decided to seize the nuclear-climate flag from the weakening hands of their western colleagues. It was evidently not just a question of Russian nuclear specialists rushing to deal with the challenges of the day, nor was it an attempt to start a trend. They made a fundamental change in their international self-promotion strategy simply because their old approach to selling reactors wasn’t working. Rosatom never tires of pointing out that its portfolio contains dozens of contracts for new power stations all over the world and is worth a total of 100 billion dollars.

But for some reason, reactors are actually only being built in three or four countries, and numerous agreements signed years ago remain only on paper. In the last six months alone, Vietnam pulled out of a contract and a court in South Africa ruled that a contract with Russia for the development of nuclear power infringed its constitution. And in Russia itself, many more reactors have been planned than built. The irresistible spread of Russian nuclear power plants throughout the world seems to have been put on hold, and something needs to change. So why not change your image? Anyone who refuses to purchase a Rosatom facility will become an enemy of the climate like Donald Trump.

Despite its climate change “coming out”, Rosatom is unlikely to be able to sell any more reactors. It will take some time even to fulfil those contracts that are already signed and sealed. And it’s highly unlikely that all the orders in its portfolio will ever be completed. If there is anything behind Rosatom’s new advertising campaign, it is the hope that Russia will be able to access international finance for the fight against climate change. The UN and 2016 Paris Agreement are putting together special funds for precisely this purpose.

In other words, Rosatom will try to do what its western counterparts did back in 2000. The state corporation doesn’t need to apply for finance itself – the developing countries buying from it, short of cash and technology to mitigate the consequences of climate change, will do that. And perhaps Rosatom won’t even need to finance the construction of nuclear power plants by borrowing from the Russian state budget, as it mostly did until now – although it will have to invest some money.

Russia’s public purse has been seriously hit by its economic crisis, and perhaps this is the reason behind Rosatom’s present reincarnation as a “climate-friendly” body. And the fact that nuclear energy is too expensive and inefficient for its stated goals is neither here nor there, it’s just a question of survival.