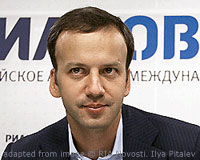 MOSCOW, August 13 (RIA Novosti) – Russian Deputy Prime Minister Arkady Dvorkovich said Wednesday that a possible food shortage and a resulting imbalance in food prices that could occur in the country’s westernmost exclave could easily be compensated by Belarus.

“There is a case in particular [of price imbalance] and that’s the Kaliningrad region, which is extremely close to Belarus, and I think that the imbalance on the Kaliningrad market could be compensated with Belarusian goods,” Dvorkovich said during a televised interview on Rossiya-24 news channel.

This issue arises in light of the food import ban that Russia imposed on the European Union, the United States, Canada, Australia and Norway. The ban was implemented in response to Western economic sanctions and targeted imports of beef, pork, fish, poultry, fruits, vegetables, nuts and dairy products.

Several countries affected by the food ban have already expressed concerns about the negative effect that it might have on their economies. Latvian Prime Minister Laimdota Straujuma said Tuesday that Russia’s move would cost Latvia 55 million euros ($73.5 million).

Australian beef farmers and dairy producers are preparing to suffer significant losses, while the Austrian Gardener’s Union predicts a downright “catastrophe” for the whole of Europe.

Top-level managers of several British companies have said they did not favor the sanctions Western nations have imposed on Russia and believe that it is through trade that Russia and the West can reach a better understanding.

The United States, the European Union and several other countries have imposed sanctions against Russia over its alleged role in the Ukrainian crisis, targeting certain individuals and companies with asset freezes, visa bans and hindering their financial operations. Moscow has repeatedly said that applying sanctions was counterproductive and warned against repercussions.