A native of the United Kingdom who later became a U.S. citizen, Hill, who has described herself as “a nonpartisan foreign-policy expert,” is a scholar and historian who has written several books on Russia, including a 2013 biography of Putin that she co-authored. 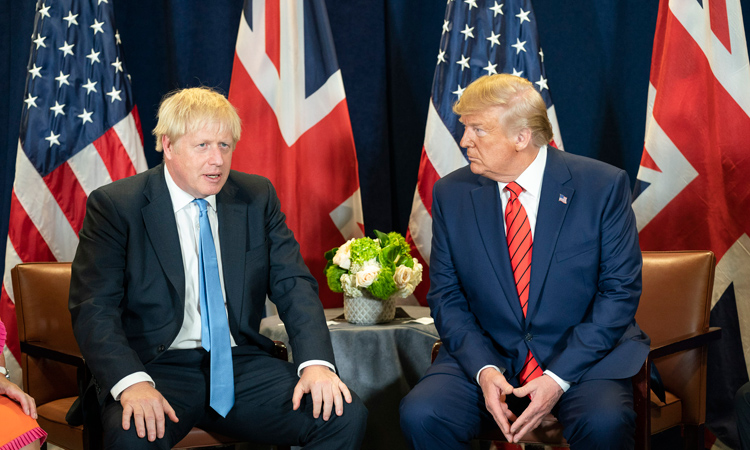 Her newly released book, There Is Nothing For You Here, explores her home country, her adopted one, and Russia — and the similarities they share due in part to the collapse of each country’s industrial base. The result, she argues, has paved the way for populist leaders like Putin, British Prime Minister Boris Johnson, and Trump.

A fluent Russian speaker, Hill served on the National Intelligence Council during the second term of President George W. Bush. To the surprise of some colleagues, she agreed to serve as the top Russia adviser in the White House National Security Council under Trump.

As adviser, Hill was front and center as the administration tried to craft a coherent approach to Russia, an effort that was often vexed by Trump’s open admiration for Putin.

During a July 2018 news conference in Helsinki, where Hill was part of the U.S. delegation, Trump deflected a reporter’s question about whether he accepted U.S. intelligence agencies’ findings that Russia interfered in the 2016 election that Trump won, and responded with a meandering answer that endorsed Putin’s denial of the findings.

“I contemplated throwing a fit or faking a seizure and hurling myself backward into the row of journalists behind me,” Hill writes in the book. “But it would only have added to the humiliating spectacle.

“The questions got right to the heart of his insecurities,” she writes, adding that if Trump had agreed that Russia had interfered in 2016 to his benefit, he might as well have said, “‘I am illegitimate.'”

For Putin and his advisers, the furor that resulted undermined any nascent efforts toward new bilateral agreements, for example, on arms control, she says. “On his way out the door from the conference, [Putin] told his press secretary, within earshot of our interpreter, that the press conference was ‘bullshit,'” Hill writes.

It was not until late 2019, however, that Hill became a household name in the United States, when she testified in Trump’s first impeachment trial in Congress.

The trial was prompted by the July 2019 phone call Trump had with Ukrainian President Volodymyr Zelenskiy, in which Trump appeared to condition military aid to Ukraine on Zelenskiy’s government pursuing criminal investigations of Joe Biden and his son Hunter.

She left the Trump administration just days before the phone call between Trump and Zelenskiy.

Trump was ultimately impeached by the Democratic-led House of Representatives, then acquitted by the Republican-led Senate.

“I have no regrets about doing it,” Hill said of serving in the Trump White House. “Because I went in there to try to deal with all the things we’ve just been talking about. Because I saw 2016 for what it was — which was…kind of this attempt to upend our domestic politics. And to really sow chaos.

“It opened my eyes to the problems in the United States itself,” she told RFE/RL.

Earlier this month, just before the book’s formal release, Trump issued a statement that ripped into Hill, calling her a “Deep State stiff with a nice accent” and asserting that she was “terrible at her job.”

In the interview, Hill said Russia’s 2014 seizure of Ukraine’s Crimean Peninsula was a watershed moment in Putin’s evolution as Russia’s leader that “vaulted him into this kind of quasi-autocratic position.”

“The Russian state is there, alive and kicking, and, you know, carrying out its functions, but he stands above everything right now,” she said. “I’m a little surprised he has gotten to this point, because it’s a way that really destabilizes Russia, or has the potential to destabilize Russia — to do the opposite of what he’s trying to achieve.

“I think he’s put Russia in a rather dangerous, unpredictable position by accruing so much power,” she told RFE/RL.

Last year, the Kremlin engineered constitutional changes that pave the way for Putin to stay in office beyond 2024, potentially remaining in power until 2036. He has not said whether he will, however, and has tried to tamp down discussion by saying that talk about succession is “destabilizing.”

“I don’t necessarily think that he’s going to stay in power till 2036,” Hill said. “He has to keep us guessing then, because you can’t be a lame duck. So he has to make sure that this doesn’t leak out. So my best guess is there’s a plan behind the scenes, but they’re having difficulty effecting it and implementing it.”

That said, she points to the example of Aleksei Navalny, the anti-corruption crusader and opposition activist who nearly died in August 2020 after a poisoning he blames on Putin and Russian intelligence. After recuperating, Navalny returned to Russia, where he was jailed on what he and his supporters said was a politically motivated charge.

“The reason that Navalny is in jail, and the reason that they tried to kill him, is because they want him out of the picture in 2024, because he’s real competition,” she said.

‘Monkey On Your Back’

The use of poisons today by Russian intelligence, Hill said, is a legacy of Soviet-era espionage, assassination, and sabotage tactics, a system that Putin, a longtime Soviet KGB officer, was trained in.

Hill also pointed to the phenomenon known as the “Havana syndrome” — a series of unexplained and debilitating ailments that have affected about 200 U.S. diplomats, intelligence officers, military officers, and other government personnel.

“It’s all the things that we haven’t called them out on that we know we should be worrying about,” she said. “We have the Havana syndrome that people are greatly concerned about right now and doing investigations. And again, [the Russians] look like the likely culprit because of all the knowledge of the development of similar weapons in the past.”

The tensions between Washington and Moscow — which Russia’s foreign minister in April described as worse than during the Cold War — come amid substantial interest, inside and outside the U.S. government, in moving away from a Cold War-style standoff. China should be the priority concern, many U.S. experts say — a view that President Joe Biden’s administration has embraced.

“One senior official described to me years and years ago that Russia was kind of like the monkey that you were trying to get off your back. It was kind of a weird image,” Hill said. “But it…filled in how a lot of people were thinking: ‘Why we are we still in this confrontation? Didn’t the Cold War end?’

“Russia has become for many Americans a thing of the past. There’s just not a lot of popular appeal to be having a confrontation with Russia, either,” she said.

Her tenure in the White House, Hill said, gave her insights into what she said were parallels between the United States today and Russia in the early 1990s, when President Boris Yeltsin clashed with parliament, resulting in the shelling and storming of the parliament building in October 1993.

“The United States is going through a similar ‘Time of Troubles'” to the turbulence that Russia experienced in the 1990s, she said, adding that some Russians compare Trump to Yeltsin.

“But Yeltsin had more discipline,” she said. “He wasn’t trying to, all the time, pervert democracy — because he could have availed himself of more of the powers of the constitution that he gave himself after that terrible episode of shelling the White House, and he didn’t.

“But Putin came along and did and just gave even more powers to the executive, to the president. So, you know, unfortunately, I see a lot of parallels now [with] what happened in Russia in the 1990s,” she said.

“This is actually a big difference with Putin,” she said. Trump “doesn’t want to govern through the state. He wants to dismantle the state.”

Other parallels, she argues, include both leaders embracing not only “elements of personal power,” but also the power of public performance.

In the wake of the takeover of Crimea, Putin’s popularity soared among Russians, many of whom saw it as a historical wrong corrected. Some influential advisers talked about “Novorossia” — a historic concept dating back to imperial Russia, when Moscow controlled parts of Ukraine.

“You see the similarities. [Trump] plays to nostalgia. He says he’s going to make America great again, and Putin is saying the same thing; he’s out there annexing territory,” she said. Trump is “doing a lot of things…that would be very reminiscent of some of the things that Putin has been doing.

Hill doesn’t spare the U.S. Democratic Party from criticism. In the interview, she drew a parallel to the years after the Soviet collapse in Russia, when Yabloko and other liberal political parties were fractured and squabbling, constantly at odds.

Among the U.S. Democrats, “there’s no concept of party cohesion and coherence,” she contended. “They’ve all got different issues that are fighting over different sides and factions within the party. And that’s what we saw in Russia, too, right? The opposition to Yeltsin, the liberal parties…were always fighting among each other…. That’s again why it’s like 1990s Russia.

“There’s a lot of uncertainty. I think, you know, in the case of both the United States and in Russia, things can turn in different directions,” Hill said. “I’m worried about the direction that the United States is taking. But I think there’s plenty of opportunity to take it off in another path. And I think the same in Russia.”