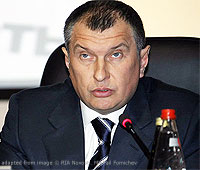 “He will never let himself be pressured into making a decision,” Sechin, who’s worked with the Russian leader for more than two decades, said in a Sept. 26 interview on a research ship traversing the Kara Sea in the Arctic region. “This is from my experience of communicating with him. It’s useless to even try.”

The European Union and the U.S. have targeted individuals and companies to punish Russia for its annexation of Crimea in March and its role in the pro-Russian insurgency in eastern Ukraine, where the government in Moscow denies involvement. Sechin, who was named on a U.S. blacklist in April, said he didn’t approach Putin on the subject.

Putin “is a very busy man,” Sechin said. “He has a huge, difficult job. I wish him all the best. I am watching what he’s doing with hope. I have neither the ability nor the right to try to distract him from his work.”

Sechin, 54, started to work for Putin at the St. Petersburg mayor’s office in the 1990s and has risen through Russia’s elite along with his patron. He served as deputy chief of staff during Putin’s first two terms as president then became his deputy in charge of the oil industry when Putin was prime minister from 2008 to 2012.

When Putin retook the Kremlin two years ago, Sechin became state-controlled Rosneft’s chief executive, having been the company’s chairman 2004-2011.

Sanctions are “simply unjust,” he said. “I have nothing to do with the conflicts. I wasn’t involved in decision making. That’s why this is groundless.”

While the U.S. and EU sanctions lists aren’t identical, they combine to target some of wealthiest and most influential Russian officials and business people and Putin’s inner circle, including billionaires Yury Kovalchuk, Gennady Timchenko, Arkady Rotenberg as well as Vladimir Yakunin, the head of Russian Railways. Italy froze luxury properties worth 28 million euros ($35 million) that belong to Rotenberg, a boyhood friend and former judo partner of Putin.

Sechin said he has no criticism over the lifestyle of Russian officials and billionaires who recently found out that their property abroad is at risk of seizure under EU sanctions.

“Active people are more useful to society,” Sechin said. “God willing, I wish all of them good health, luck, wellbeing and wealth.” He said he doesn’t have assets in the U.S. or “anywhere else abroad.”

Even if the sanctions don’t hurt him financially, the ban on visiting the U.S. is a blow that hurts “creative development,” Sechin said.

“This limits my ability to work with American partners, limits opportunities to work with enterprises, to familiarize myself with technology, to visit deposits, to gain experience,” he said.

Rosneft is more affected than its CEO. Besides sanctions that bar cooperation with U.S. companies in the Arctic to explore oil and gas fields, the company is also shut out from borrowing in the U.S. and European capital markets for periods of more than 90 days.

The company’s shares gained 1.3 percent to 232 rubles in Moscow. They have lost 7.8 percent this year, compared with a 6.2 percent decline in the benchmark Micex stock index.

Russia retaliated to the sanctions by imposing a ban on a range of food imports in August. A member of the ruling party last week proposed a law that would allow the seizure of foreign states’ assets in the country. Sechin said he hopes the situation will be resolved soon, allowing relations to be normalized.

Rosneft, in the meantime, is pushing ahead with plans to expand into the oil services business and to buy the global oil merchant business ofMorgan Stanley. (MS) The company also struck oil in the Arctic.

”In the case of our company, the presence of the state as a controlling shareholder allows us to get licenses to work on the shelf without lots of competition,” he said.

When asked if Rosneft can grow so big that the state will again control all of Russia’s oil, Sechin said the country won’t return to state monopoly in the industry.

”That’s impossible, he said. ”It is simply impossible. There are companies, their shareholders, there are obligations to partners.”

Sechin’s contract ends in May. While he declined to give a definite answer on whether he’ll seek another term, he said he likes his job and ”will think” should such an offer be extended.

“I’m a hired manager,” he said. “It’s impossible to say that for me it will last forever.”