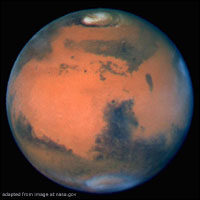 (Bloomberg – bloomberg.com – Ilya Arkhipov – April 12, 2013) Russia’s building a system to neutralize space weapons as it prepares to send a man to Mars and build a permanent moon base, President Vladimir Putin and members of his government said.

Russia will have the technical means by 2030 to counteract threats from space by other countries, Deputy Prime Minister Dmitry Rogozin said at a government meeting near the country’s new cosmodrome in the Far East today. Until then, Russia will continue to expand its orbital capabilities to monitor potential threats and prevent rocket attacks, Rogozin said.

“If someone ventures to break the tradition of keeping space as a collaboration zone, then Russia will undoubtedly find a technical response,” said Rogozin, Russia’s former envoy to the North Atlantic Treaty Organization. Putin said he may create a space ministry to help develop the industry.

Russia, which put the first man into space, Yuri Gagarin, 52 years ago today, plans to spend 1.6 trillion rubles ($52 billion) on its space industry in 2013-2020, including completing the Vostochny cosmodrome near the border with China. Russia currently uses the Soviet-era Baikonur base in Kazakhstan for manned missions.

The new facility is on schedule to handle its first rocket launch by 2015 and its first manned mission by 2018, according to Putin.

Russia is going ahead with plans for its first manned mission to Mars, even after it lost the Phobos-Grunt probe to one of the red planet’s moons last year, Rogozin said. That was one of at least four failed Russian spacecraft launches since 2010. Roscosmos, Russia’s space agency, halted launches of Proton-M rockets last August after two satellites were lost.

Roscosmos is working on a new “super-heavy” rocket for the Mars mission, Vladimir Popovkin, the head of the agency, said today.

Russia last month signed an agreement with Europe’s space agency for a joint unmanned mission to Mars to search for signs of life beyond Earth.

Russia is also pushing forward with plans to establish a permanent base on the Moon for scientific study, Rogozin said, without elaborating.

Russian rocket-maker OAO Energiya has proposed industrializing space to mine the moon for helium-3 and other potential sources of energy.