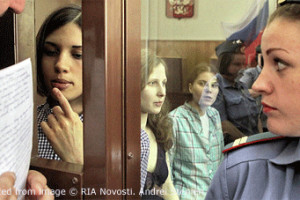 YAKUTSK. Aug 8 (Interfax) – The Yakutsk City Court has once again proven unable to decide on an administrative penalty for two members of the Pussy Riot punk group, Maria Alyokhina and Olga Borisova, who were detained on Monday for staging an unpermitted action in support of Ukrainian film director Oleh Sentsov.

“The judge decided to return the administrative material to police because the action participants were not brought to the [court] session on Tuesday,” a court spokesman told Interfax.

Borisova said on her social networking website account that Alyokhina and she had flown out to Moscow on Tuesday morning.

On August 6, the two Pussy Riot members held an action near the maximum-security penal colony in Yakutsk, where Sentsov is serving the term. They unfolded a poster saying ‘Free Sentsov’. Police detained the two girls a day after the action. They later were taken to court. The court ruled to return the administrative materials against the two girls to police. Alyokhina and Borisova were released in the courtroom.

In August 2015, the North Caucasian District Military Court in Rostov-on-Don sentenced Sentsov, who was detained in Crimea in 2014, to 20 years in a maximum-security penitentiary on charges of setting up a terrorist group in the peninsula.

In late February 2012, Pussy Riot members performed a so-called punk prayer at the Christ the Savior Cathedral. A video clip of their performance was posted online. Police later detained three of them, Nadezhda Tolokonnikova, Maria Alyokhina and Yekaterina Samutsevich.

In August 2012, the Khamovnichesky District Court sentenced them to two years in a medium-security penitentiary for hooliganism. In October, 2012, the Moscow City Court changed Samutsevich’s court judgment to a suspended sentence and released her in court.

In December 2013, Alyokhina and Tolokonnikova were released due to the amnesty declared by the State Duma on the occasion of the 20th anniversary of the Russian Constitution.