Orthodox Patriarch Says Russians Having Too Much Fun 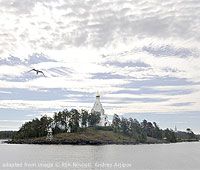 (RFE/RL – rferl.org – July 11, 2013) Russian Orthodox Patriarch Kirill has urged Russians to have less fun and spend more of their free time in seclusion.

On July 11, Kirill said there was “more fun than needed” in the life of Russians.

He said people spent a lot of their energy working and should occupy their time in isolated, quiet places instead of celebrating during their vacations.

He cited the rugged archipelago of Valaam, close to the border with Finland, as a suitable holiday destination. (Valaam is home to a 14th-century monastery and has a population of roughly 600.)

The ultraconservative patriarch, who is a close ally of President Vladimir Putin, has not hesitated to speak his mind on a number of other issues in the past.

Earlier this year, he sparked controversy by describing feminism as a “very dangerous” phenomenon.

He has also raised the ire of reformists by criticizing political opposition protests and supporting the imprisonment of members of the feminist collective Pussy Riot last year for performing an anti-Putin “punk prayer” in Moscow’s Christ the Savior Cathedral.

Although he is well-known for his criticism of Western consumerism and liberal values, Kirill raised eyebrows after he was spotted wearing a 30,000 euro ($39,000) Breguet watch during a visit to Ukraine in 2009.

The Swiss watch was later at the center of an embarrassing kerfuffle for the patriarch when it appeared to have been airbrushed out of a photo on Kirill’s website.

The move was rumbled by eagle-eyed bloggers, who noticed that the photoshopper had forgotten to erase the watch’s reflection on a table. (The incident forced the church to issue an explanation that the luxurious watch was, in fact, a gift from a wealthy parishioner and that Patriarch Kirill usually preferred to keep it in its box.)

Despite being no stranger to controversy, Kirill still continues to be a force in Russian politics. He has the right to review any legislation before the State Duma that is of interest to the Russian church.

He also maintains an influence in social and cultural spheres; making efforts to expand the teachings of Orthodox Christianity in Russia’s state schools while strongly fighting against sex education, which is included in the already ratified European Social Charter.

— Ana Lomtadze, with reporting by Interfax and ITAR-TASS