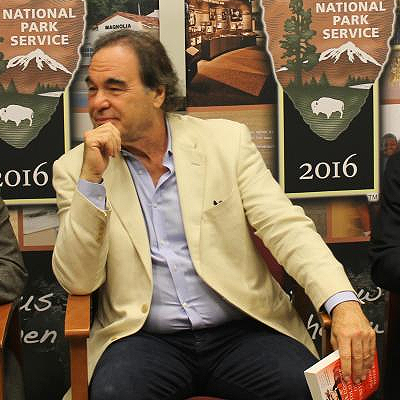 (Moscow Times – themoscowtimes.com – December 31, 2014) Hollywood film producer Oliver Stone has said he wants to make a four-hour documentary telling the “dirty story” of the overthrow of former Ukrainian President Viktor Yanukovych in what he believes was a “coup” organized with the help of the United States’ Central Intelligence Agency.

“A dirty story through and through, but in the tragic aftermath of this coup, the West has maintained the dominant narrative of ‘Russia in Crimea,’ whereas the true narrative is ‘USA in Ukraine.’ The truth is not being aired in the West,” Stone wrote on his Facebook page on Tuesday.

Stone said he had already spent four hours interviewing Yanukovych in Moscow for the project, in addition to several “police officials,” all of whom believe “foreign elements” were responsible for the violent Maidan protests in Kiev that culminated in February with the overthrow of the Russia-backed president.

“Details to follow in the documentary, but it seems clear that the so-called ‘shooters’ who killed 14 policemen, wounded some 85, and killed 45 protesting civilians, were outside third party agitators,” Stone wrote.

The Hollywood director’s interpretation of events echoes the Russian government’s suggestions that the regime change was a “color revolution” funded by foreign governments.

President Vladimir Putin in a security council meeting earlier this year said that the situation in Ukraine was partly the work of “outside forces” and warned that Russia must do all it can to prevent a similar uprising on its own turf.

Stone and Putin met in November this year, after which Stone proposed making a documentary about the Russian president as well.

Stone said at the time that Putin “represents a different point of view that Americans don’t want to hear,” RIA Novosti reported.

In Stone’s view, the revolution in Ukraine resembles other incidents in which U.S. authorities may have orchestrated the overthrow of foreign governments.

“Create enough chaos, as the CIA did in Iran ’53, Chile ’73, and countless other coups, and the legitimate government can be toppled. It’s America’s soft power technique called ‘Regime Change 101’,” Stone wrote.

Stone has been known to focus on controversial figures in his work, including Richard Nixon, Hugo Chavez and George W. Bush. One of his most famous films, the legal thriller JFK starring Kevin Kostner, suggested that the assassination of U.S. President John F. Kennedy was organized by a conspiracy of powerful elites within the U.S. government.

Yanukovych has kept a low profile since fleeing Ukraine in the spring. The new authorities in Kiev have pushed to have him prosecuted for the killing of protesters during the Maidan protests, which they describe as war crimes.