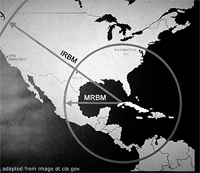 (Andre de Nesnera – Voice of America – October 9, 2012) This month marks the 50th anniversary of the Cuban Missile Crisis, a confrontation between the United States and the Soviet Union that brought the world to the brink of nuclear war.  Historians say there were several key events that led to the decision by Soviet leader Nikita Khrushchev to station nuclear missiles in Cuba in October 1962.

In January 1961 John F. Kennedy assumed office as president of the United States.  One of his major foreign policy dilemmas was how to deal with Fidel Castro, a Cuban nationalist who in 1959 overthrew General Fulgencio Batista, the country’s American-backed president.  Castro ultimately allied himself with the Soviet Union.

In April 1961, Mr. Kennedy launched the Bay of Pigs invasion, an unsuccessful attempt by a CIA-trained force of Cuban exiles to overthrow Mr. Castro.

“The Soviet Union, as a superpower, has the obligation to defend all their allies and their clients, even risking nuclear war,” he said. “Soviet intelligence gathered information that Americans planned to invade Cuba sometime in autumn, maybe in October. And so through that period, Cuba became for the Soviet Union the same as West Berlin for the United States – small, useless piece of land deep inside hostile territory,” Khrushchev said.

Graham Allison, author of a book on the Cuban Missile Crisis, said at that time, the Soviet Union had a huge advantage over the United States in terms of conventional troops in Europe.

“The U.S. was committed to and determined to defend (West) Berlin at all means,” he said.  “Khrushchev had been trying to ‘solve the problem’ of (West) Berlin by which he meant absorb it into the Soviet sphere.  And the U.S., both under Eisenhower and under Kennedy, were determined that this was not going to happen and were prepared to risk nuclear war over it.  So the Berlin developments were, in effect, a kind of twin to the Cuban missile crisis,” Allison said.

Sergei Khrushchev saw the same potential outlook, but from the Soviet and Cuban sides.

“If you will not defend it, even risking nuclear war,” he said, “you will lose face and your other allies will not trust you.  And you know that the United States had plans to use nuclear weapons if Soviets tried to take control of West Berlin.  So it was a very similar situation on both sides,” said Khrushchev.

In June 1961, President Kennedy and Soviet leader Khrushchev held a summit meeting in Vienna, Austria.  The issue of West Berlin dominated the session, but no progress was made.  Many experts said Khrushchev came away believing the U.S. President was inexperienced and weak, and that might have contributed to the Soviet leader’s decision to station missiles in Cuba.

Finally, many analysts, including Graham Allison, said Moscow had another motivation to help Castro. “From the perspective of Khrushchev and the Soviet Union,” Allison said, “this was their success story in the Western hemisphere and they were committed to try and keep it alive.”  An effort, said experts that brought the world to the brink of nuclear war.