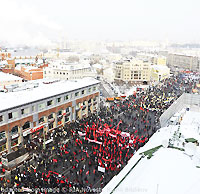 “The opposition organizing committee decided today to hold the next March of Millions in early December, the (first) anniversary of the start of mass protest,” Udaltsov told Interfax on Wednesday (19 September).

Furthermore, he said, an event in support of the election to the opposition coordinating council will be staged on 20-21 October; the format of the event will be confirmed later. (Passage omitted: on the previous March of Millions event.)

At the March of Millions on Saturday, Udaltsov suggested that the opposition gather for a mass rally again on 20 October. On the same day, Solidarity representative Ilya Yashin revealed on Twitter that Udaltsov had announced the date of the next march without consulting anyone. On Monday, one of the organizers of the March of Millions, Sergey Davidis, commenting on Udaltsov’s proposal, supported it but said that the organizing committee could convene this week or next to finalize the date of the next March of Millions. (Passage omitted: Davidis quoted)

Opposition activist and author of the Rospil (anticorruption) project Aleksey Navalnyy said (on 17 September) that the date of the new protest had not been discussed. (Passage omitted: Navalnyy quoted.) Navalnyy believes that it is now more important to concentrate on the election to the opposition coordinating council. (Passage omitted)