NEWSWATCH: “The Curious Case of the Television Star Running Against Vladimir Putin” – The New Yorker/Masha Gessen 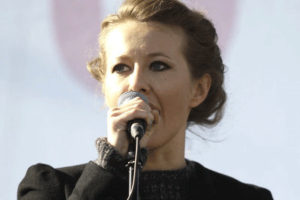 “… A wave of discomfort washed over the room when Sobchak said, ‘Russia is the biggest European nation ….  We are Europeans, we are not Asians.’ Another wave came after an audience member noted that Sobchak has risked alienating voters by voicing support for L.G.B.T. people and even same-sex marriage; Sobchak lamented that Russian television would surely now disregard all the serious topics that had been discussed that evening, and focus instead on the frivolous topic of L.G.B.T. rights. * * * Sobchak believes that Putin is not a murderer: political murders that take place in Russia with some regularity are, in her opinion, the work of zealous supporters, rather than the execution of explicit orders. And back in 2000, she said, Putin did not yet have those kinds of zealous supporters. ‘I’m aware of those ideas,’ Sobchak told me, about the whispers that Putin had her father killed. ‘But that’s just unthinkable. If that is true, then the world is an entirely different place than I imagine.'”

NEWSWATCH: “The Curious Case of the Television Star Running Against Vladimir Putin” – The New Yorker/Masha Gessen

[featured image is file photo from a different occasion]