NEWSWATCH: “Mikhail Khodorkovsky Is Putin’s Most Powerful Enemy (in Exile). Russia may not be ready for the ex-billionaire to return, but his arguments are gaining ground.” 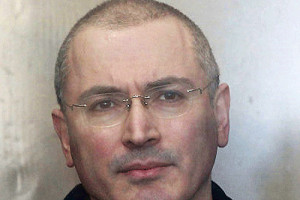 … the Open Russia Foundation …. basically represents the brains and money behind the Russian opposition [and recently] held an event at its headquarters … in London. … predictions for Russia’s future seemed to grow darker by the minute.  * * * On the back row of the rather thin audience, the foundation’s sponsor, exiled Russian tycoon Mikhail Khodorkovksy – in torn jeans – was busy reading an e-book. Only once did the host of the event peer up …

* * * ‘I plan to return to the country; I will come back as soon as the regime begins to fall apart,’ Khodorkovsky told The Daily Beast …. ‘And now I am doing a lot, everything I can, to arrange it so that when this regime begins to fall, the collapse happens in a different way ….
* * * The most recent survey by the Levada Center shows that Khodorkovsky … is the most famous opposition figure in Russia: 45 percent of Russians know his name. About the same percentage, 47 percent of the population, approved of Putin’s decision to let Khodorkovsky out of jail ….

Click here for “Mikhail Khodorkovsky Is Putin’s Most Powerful Enemy (in Exile). Russia may not be ready for the ex-billionaire to return, but his arguments are gaining ground.”

[featured image is file photo from earlier year and occasion]