NEWSWATCH: Kennan Cable No. 30: Democracy in Ukraine: Are We There Yet? [Excerpt] 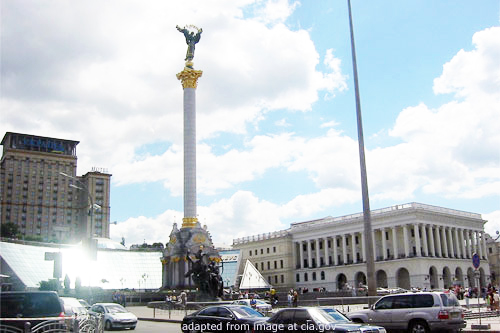 More than a quarter century ago, the Ukrainian people made a historic choice in favor of independence, democracy, and the free market. Their vision of a fully sovereign, democratic, and prosperous state has been only partially fulfilled. While Ukraine is a clearly established polity with internationally recognized sovereignty, it is nonetheless hampered in its democratic and free market development by endemic corruption, retrograde political cycles, and aggression by its powerful neighbor Russia.

After the dissolution of the Soviet Union, Ukraine emerged as a highly pluralistic but unstable democracy. Through the 1990s, the country’s political system developed along two parallel paths, combining a liberal democratic façade with post-Soviet oligarch-controlled distribution of power and resources. The contradictions between these two dimensions of Ukraine’s politics yielded two revolutionary cycles, spanning roughly 1992-2004 and 2005-2014. During each of these cycles, a period of popularly supported democratic reforms was soon displaced by simulated democracy, driven essentially by oligarchic competition and then, later, by authoritarian consolidation, resulting in civic protests and eventual regime change, resetting the cycle.

Ukraine’s transition from Soviet republic to fully democratic state has been inhibited by these cycles. It is yet to be determined whether Ukraine’s democratic development has been set on a sustainable path in the wake of the 2014 Euromaidan, the process of closer political and economic association with the European Union (EU), and the war in Donbas. There are many reasons to hope this is now the case, but there is also cause for serious concern about the sustainability of current reform efforts and democratic politics….

Ukraine has not yet found balance between positive and negative trends in its democratic development. The positive trends flow from the EU-Ukraine Association Agreement, the modestly successful reform agenda, and the support of Western partners.[lxxviii] The 2016 referendum in the Netherlands on EU-Ukraine Association Agreement and the denial of a foreseeable EU membership have only slightly diminished these positive impacts.[lxxix] Likewise, attempts by Ukrainian elites to reverse some reforms in 2016-17 have thus far been successfully countered by coalitions between civil society, reformist politicians, and Western diplomatic services in Kyiv (e.g., the preservation of NABU’s autonomy).[lxxx]

On the other hand, Russia’s invasion and annexation of Crimea and its continuing support for violent separatists in Donbas have created much more challenging conditions for Ukrainian democracy. As a result of these Russian interventions, the military and security establishment play a far greater role in Ukrainian government, and some prominent civic movements draw inspiration and credibility from war-related ideologies. These new factors increase the political weight of the president as military commander-in-chief, and introduce risks of even more radical authoritarian tendencies on the part of political forces that are now entirely outside the government.

Economic prosperity has been subordinated to security concerns (as the recent blockades of Donbas showed). Voters continue to reject most state institutions as untrustworthy and corrupt.[lxxxi] The result is that politics are highly fluid, institutions are weak, and clans dominate political competition, with some indications of the pre-revolutionary cycles witnessed before in the early 2000s and 2010s.

All in all, Ukrainian democracy has come a long way from its earliest post-1991 manifestations. It now boasts a vibrant civil society, well-organized and powerful political parties, and a diverse pluralism of domestic, social, and geopolitical influences. Yet Ukraine’s democracy is also hostage to the ongoing war with Russia and the country’s continuing socio-economic crisis. The future depends on whether the war can be brought to a peaceful end, national reconciliation can be launched, and ordinary Ukrainians can begin to benefit from the many reforms now underway. With these three foundational tasks achieved, Ukraine’s democracy will be back on track.

Click here for: “Kennan Cable No. 30: Democracy in Ukraine: Are We There Yet? (excerpt)” – Kennan Center/Matthew Rojansky, Mikhail Minakov