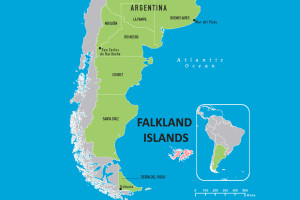 CNBC covers British military reinforcements of Falkland Islands defenses on the heels of remarks by the Russian Ambassador to the UK comparing the comparing the Falklands to Crimea.

The U.K. has sent extra military support to one of its overseas colonies at the bottom of the world, the Falkland Islands, amid concerns that it is facing increased risk of attack from Argentina, backed by Russia.
… the remote islands in the South Atlantic … were the subject of a short-lived war between the U.K. and Argentina in 1982, and lie to the east of Argentina, 8,000 miles away from the U.K.
… Russia’s ambassador to the U.K. compared the U.K.’s occupation of them unfavorably to Russia’s annexation of Crimea …. 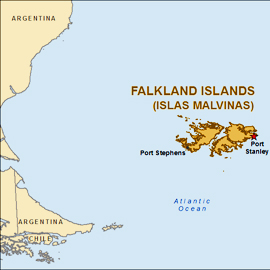 Argentina apparently has picked up on the notion.

Argentina’s left-leaning President … struggling with a debt crisis … said late last year: ‘The Malvinas [Falklands] has always belonged to Argentina, the same way that Crimea also belonged to the Soviet Union until it was given to Ukraine.’