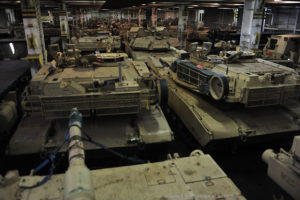 “… major new deployments of tanks and other heavy equipment will fan out to nations on the #Russian frontier … part of the largest infusion of U.S. troops to #Europe since the 1991 breakup of the Soviet Union. … the long-planned effort comes at the most unsettled time for U.S.-European relations since World War II, with #Trump questioning old alliances and seeking to build bridges to the #Kremlin. * * * Monday’s exercises involved the U.S. Army’s 3rd Armored Combat Brigade Team, 4th Infantry Division, which arrived in Germany … with 87 Abrams M1A1 tanks, 20 Paladin artillery systems and 136 Bradley Fighting Vehicles. The troops will spread across Eastern Europe, fanning into the Baltic nations, digging into Poland and also deploying to Romania, Bulgaria and Hungary. When the brigade finishes its deployment in nine months, it will be followed by another group of similar size, a rotation that the Pentagon currently expects to maintain on a near-permanent basis. * * * No matter the winds of change in Washington, the U.S. military appears to be making plans for a long-term shift in focus toward Europe.”