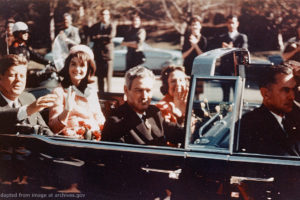 “The U.S. government released Monday a large trove of documents pertaining to the assassination of President John F. Kennedy, including previously top-secret audio files and transcripts of the CIA interrogating a former Soviet spy who claimed to have intimate knowledge about the killer’s connection to Moscow.  In accordance with the JFK Assassination Records Collection Act of 1992, which mandates that all 5 million pages of JFK-related documents become public by later this year, the CIA and FBI declassified more than 3,800 files and made them available at the National Archive. The batch includes 3,369 items that were previously redacted and 441 never-before-seen items, including a number of CIA interviews with KGB defector Yuri Nosenko. * * * … the CIA and the FBI do not believe that the Soviet Union played a role in Kennedy’s assassination and have concluded that Oswald acted alone. Oswald, a former Marine, defected to the Soviet Union in 1959 and worked as a laborer before returning to the U.S. in 1961. Two days after he fatally shot Kennedy as the president rode in a Dallas motorcade in 1963, Oswald himself was shot dead by local nightclub owner Jack Ruby ….”