NEWSWATCH: “Advice to Trump: Beware of Russian Trolls; The recent stray spy ship and the fly-bys in the Black Sea are signs that the Kremlin is engaging in its favorite pastime: pushing America’s buttons” – Foreign Policy Magazine/Mark Galeotti 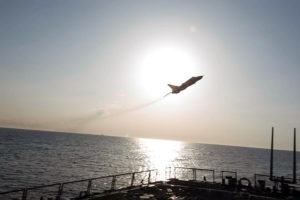 “Last week, a Russian spy ship … spent a few days loitering approximately 30 miles off the East Coast …. up to Connecticut … down to Virginia, generating … consternation …. in the wake … of a few other incidents that set off alarm bells … [it was] reported that #Russia had secretly deployed cruise missiles … in likely defiance of a 1987 arms treaty. … a few days later, Russian fighters buzzed a U.S. destroyer in the Black Sea. … The incidents themselves are hardly cause for alarm, though they should be cause for carefully calibrated response. … the Russians are trying to get a sense for [the Trump] administration’s neuralgic points and red lines. And, as usual, they’re turning to their military as a political instrument. * * * … Until the Kremlin has a sense of where the Trump administration’s red lines lie, we’re unlikely to have seen the last of these little acts of geopolitical trolling. The Kremlin regards its military as an integral part of its political and diplomatic arsenal (even its take on hybrid warfare embraces political wars that will never reach the lethal phase). … we must … give a strong and … consistent response ….”

Click here for: “Advice to Trump: Beware of Russian Trolls; The recent stray spy ship and the fly-bys in the Black Sea are signs that the Kremlin is engaging in its favorite pastime: pushing America’s buttons” – Foreign Policy Magazine/Mark Galeotti