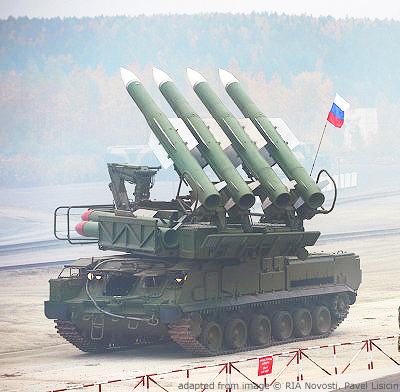 Another version of the same evidence.

The Ukrainian intelligence service has released more intercepted phone calls that show militants and Russian military intelligence agents discussing the presence, location, and disposition of BUK surface-to-air missiles in the Donetsk region. Ukrainian intelligence has provided the voice recordings and English transcripts, which I have had checked by an expert against the Russian voice recordings. I have used such intercepts in past columns on hostage releases and on ordered executions of opposition figures, and they have proven to be accurate.

Russian propaganda will, of course, sputter in indignation that these recordings are fabricated, but they are, in my considered opinion, authentic. I reproduce them in full. Readers can form their own opinion. They correspond to known facts I have already described-that surface-to-air missiles had been fired from this very area to bring down a Ukrainian transport plane days before, that a BUK missile had been sighted in the area by an Associated Press correspondent, and that the supreme rebel commander boasted on social media that his forces had brought down the plane which proved to be MH17.

But once this piece is posted, Putin’s trolls will go over every word of the often-garbled conversations to triumphantly declare they are falsifications or prove the innocence of the rebels and their Russian handlers.

Forget not that separatist field officers and their Russian superiors must communicate with one another in order to be briefed and issue orders. In the case of the BUK systems, there are instances where they use code words, like “beauty,” but in most cases they speak clearly about BUKs. Apparently, their communications are routinely intercepted by the Ukrainian side, just as I imagine similar Ukrainian field communications are by the pro-Russian side.

The transcripts of the intercepted calls show that rebels on the ground were receiving instructions from superiors in Russian military intelligence (GRU), that they discussed receipt, disposition (including hiding), and use of BUKs to bring down Ukrainian planes, that at least one BUK had come into Ukraine across the Russian border, that there was a crew that knew how to operate it, that there was likely more than one BUK, that the rebels considered the BUKs a game changer, and that they were expecting some sort of Russian hostile action launched from across the border.

Here [ttp://www.kyivpost.com/content/ukraine/sbu-releases-more-conversations-implicating-russia-in-shooting-down-malaysia-airlines-flight-video-transcript-2-356778.html] are the English transcripts and the voice recordings of intercepted phone calls in Russian:

“Oreon” – a citizen of the Russian Federation, officer of Main Intelligence Directorate (to be identified).

Oleh: – Worked out a plane near Stanitsa. Missed.

Oreon: – Great. This way they are taking revenge on planes, but only several days remain. Now we have BUK, will shall bring them (planes) down.

Khmuryi: Sergei Nikolaevich Petrovskiy, officer of Main Intelligence Directorate of Russian Federation, Deputy Chief of Igor Girkin on Intelligence; at the time of the interception he was in Donetsk.

“Buryat” – militant of rebel group “DNR,” or Donetsk People’s Republic (to be identified).

Buryat: – Where should we load this beauty, Nikolaievich?

Khmuryi: Which one? This one?

B: Yes, the one I’ve brought. I’m already in Donetsk.

B: Yes, it’s on it. We need to unload it somewhere, in order to hide.

Khmuryi: – Tell me, have you brought me one or two?

Buryat: One, one. Because they had a misunderstanding there. They didn’t give us a tug. We loaded it and went at their own pace.

B: It crossed the line (border).

H: And now have you brought it on a tug? Don’t put in anywhere… I’ll tell now where it should go, it will go together with “Vostok” tanks.

K: Sanych, the point is that my “BUK-M” will go with yours, it is on a tug. Where should I drive it to put in a column?

K: Just after the Motel, right?

Khmuryi: Listen to me carefully, behind the circle near “Motel” there will be you know what. Call to “Bibliotekar” (Librarian).

Bring inside only those, who just came back, only as much as you need for the convoy. Leave everyone else here. Not far away there is Pervomaiskoe, look at the map.

DNR militant: I got it.

Khmuryi: Settle somewhere in that area, bring there those who are left. Your task is reserve, plus protection of this piece, which you will drive now. “Giyrza” will come there too. If anything, I’m on line.

Khmuryi and “Botsman” – officer of Main Intelligence Directorate of Russian Federation (to be identified).

B: Hello, big brother. How are you?

K: Not so well. We are in Mariinovka. That’s why not well. Carrying on.

K: What do you think? (The Ukrainian army is) attacking with “Grad” (multiple-rocket launchers) all the time, finally now we’re having a little break. We’ve just hit a plane, Su-type. Because we’ve got BUK-M. They (Ukrainian soldiers) are now in Zelenopillja, trying to break free, but their way out is only through me. Yesterday we hit 2 Su jets, today – another two. Thank God “BUK-M” arrived today in the morning. It became easier. But in general, of course, it’s tough.

B: What can I say, if you need anything, call me – and I’ll arrive immediately.

B: Maybe we should cover them with (our own) Grad (multiple-rocket launchers)?

H: The thing is that we have Grad, but no spotter. And secondly, we are waiting for Russia to f*** them from their side.