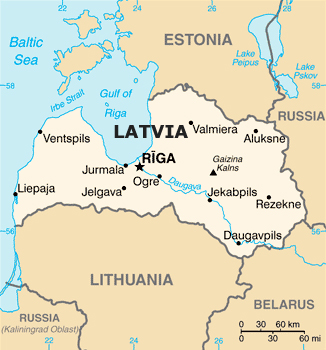 If you are constantly battling to try and disprove Russian claims that your state is essentially neo-Nazi, it doesn’t help if an evening of musical entertainment then pops up giving Nazi death squads the razzle-dazzle of a Broadway musical.

That’s exactly what has happened in Latvia where – in a move absurdly reminiscent of Mel Brooks’ classic spoof The Producers – a musical opens on October 11 about Herberts Cukurs, deputy commander of the genocidal “Arajs gang” that slaughtered around 25,000 people, as far as historical records show without the benefit of tap dance routines.

Apparently, it’s a musical biography titled “Cukurs. Herberts Cukurs.” (as in “Bond. James Bond.”) and will premiere in Cukurs’ home town of Liejapa. A preview clip posted to YouTube contains a generic power ballad promising to tell a tale of “the heavens where my name is written.” [https://www.youtube.com/watch?v=PsdwCXVJwUc]

After finding fame as a pioneering aviator in the 1930s, Cukurs volunteered for the notorious “Arajs Kommando” during the Nazi occupation of Latvia. His high profile meant he was an instantly recognisable figure in the grim testimony of Holocaust survivors which catalogued murder, assault and sex crimes full of nauseating detail.

At the war’s end he went on the run so never faced trial and was eventually assassinated by Israel’s Mossad secret service when they ran him to ground in Uruguay in 1968.

A group of just five Latvians have written an open letter calling on their government to condemn the performance.

“Cukurs’ presence or personal participation in various Nazi massacres – including the mass killing of some 25 thousand inmates of Riga Ghetto in November-December 1941 – is frequently mentioned by Holocaust survivors,” says their open letter. “We turn to the international public to join us in expressing our outrage at this attempt to present a member of a death squad as a national hero.”

Speaking to bne, one of the signatories, historian Olga Procevska says: “I don’t think one needs a special reason to protest against the glorification of a Nazi collaborator. But the trigger was my Jewish friend’s attempt to organise a protest. No one seemed to care and I thought this is ridiculous and shameful.”

Latvian Foreign Ministry spokesman Karlis Eihenbaums tells bne: “It is totally unacceptable to portray such people as heroes,” and that Latvia “has consistently condemned war crimes and crimes against humanity committed during the time that Latvia was occupied.”

Official investigations of Cukurs’ alleged crimes continue to this day, he added, but since Latvia “is a democracy and therefore supports freedom of speech and freedom of expression,” the people behind the production would be “fully responsible for it.”

Publicity materials for the musical describe Cukurs as “the most famous Latvian in the world. He gained fame with his selfless and audacious flight from Riga to Gambia in 1933-1934, in a single-engine plane that he built with his own hands. Because of this heroic deed, the press all around the world wrote about Herberts Cukurs.” No mention is made of his later activities.

The letter came a day after Efraim Zuroff, the world’s most famous Nazi-hunter, in his role as director of the Jerusalem office of the Simon Wiesenthal Center said he was “utterly disgusted” by the prospect of “a brazen attempt to rehabilitate the image of one of the most notorious mass murderers of Jews in the Baltics during the Holocaust.”

The show’s producer Juris Millers has defended his production advising Zuroff to watch the musical before making up his mind. “I am perfectly aware that the musical is provocative because it deals with a controversial and tragic period in Latvian history. Our task is not to exonerate or convict Herberts Cukurs – our aim is to initiate a discussion,” Millers told the Latvijas Avize newspaper on October 6.