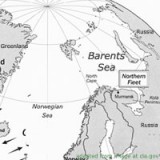 (Window on Eurasia – Paul Goble – Staunton, April 16, 2013 – http://windowoneurasia2.blogspot.com/2013/04/window-on-eurasia-moscow-lacks-funds-to.html)  Despite Vladimir Putin’s promises to ensure that Russia kept its monopoly in the Arctic as the melting of the ice cap made that region more important, Moscow has cut back plans to build nine new icebreakers, a key to that control, because the finance ministry says there is not enough money to build them.

That decision, reported today by the NR2.ru news agency, coincides with the signing of a free trade agreement between Iceland and China have and an announcement in Washington that Reykjavik will host the founding conference of a new and broader Arctic forum, which will include Beijing as well as other interested parties later this year.

In 2011, Putin said that Moscow would add nine icebreakers to its existing fleet of ten and that the Russian government would spend 38 billion rubles (1.3 billion US dollars) on that project by 2014, promises that were repeated by other officials but that have now been placed on hold (nr2.ru/yamal_ugra/434425.html).

That is because when it came time to spend the money as opposed to talking about plans to do so, the news agency said, “in the government officials suddenly discovered that there was no money for the construction of the new icebreakers” and that the finance ministry would fund “only 30 to 40 percent” of the cost of the first two.

Rosatom, the agency overseeing the project, has been told to find 56 billion rubles (1.9 billion US dollars) on its own, but people there say “they do not know where to get the money” either.  Firms using the northern sea route are not prepared to increase their contributions to the Russian organization and have expressed doubt as to whether such ships are needed.

The finance ministry delivered the bad news to Rosatom at the end of March, and the state corporation will meet with officials of the finance ministry on April 23 in an effort to find a compromise of some kind that will allow for the construction of more Russian icebreakers, a necessity given that the last Russian atomic icebreaker was launched in 2007..

The Russian government had hoped that it would play a key role both in the growing use of the northern sea route between Europe and Asia and in developing mineral resources on the Arctic seabed.  But without new icebreakers, its relative advantage in both will decline, although for the next few years, Russia will still have the largest number of such vessels in the world.

Meanwhile, as Barents Observer reported today, China and Iceland have signed a free trade agreement but  even more important, Iceland’s President Ólafur Ragnar Grímsson has announced the formation of a new Arctic forum which will be open to China and other non-Arctic-contiguous powers (barentsobserver.com/en/arctic/2013/04/iceland-announces-new-international-forum-arctic-cooperation-16-04).

The group, which is to have its founding conference in Reykjavik in October, will be far larger than the current eight-nation Arctic Council that China has been pressing to join as a permanent observer. According to the new group’s website, it aims “to strengthen the decision-making process by bringing together as many Arctic and international partners as possible under one large ‘open tent.'”

Given the coincident Russian decision and even though China does not have an Arctic coastline, Beijing, which has a major and growing icebreaker construction program in place, seems set to assume a far larger role in the Arctic and far sooner than many observers had expected.