Kremlin’s Reaction to Protests Depends on How Well Informed Putin is – and That Varies Widely, Aides Say

Changes in the relationship between the Putin regime and the Russian population is leading some to suggest that the Kremlin leader will be increasingly willing to make concessions to protesters in order to maintain himself, however risky such an approach may be (themoscowtimes.com/2019/06/19/are-putin-and-xi-going-soft-on-protest-a66058). 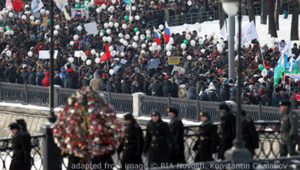 Others argue that protesters should negotiate with the regime now because they have a good chance to extract concessions (newtimes.ru/articles/detail/181926) while it has led others to say that is a waste of time (idelreal.org/a/30007196.html), with some insisting that the rise in popular protest points toward the end of the regime (economicsandwe.com/B3739CAFDB7D2343/).

But a more interesting perspective is offered by Andrey Pertsev, a special correspondent for the Medusa news agency, who explores why at the present time, Putin sometimes makes concessions to protesters but at others uses force against them (meduza.io/feature/2019/06/19/v-2019-godu-moskva-regulyarno-idet-na-ustupki-protestuyuschim-kto-eto-reshaet-i-pochemu-i-kakie-protesty-kremlyu-kazhutsya-po-nastoyaschemu-opasnymi).

The Meduza journalist draws his conclusions on the basis of interviews with present and former members of the Presidential Administration and also on others who work regularly with that powerful body. He suggests that there are five factors which determine how the Kremlin is likely to respond to any particular protest:

The reaction of the Kremlin, its decision to make concessions or apply repression also depends on the participants of the meetings at which such decisions are taken. In some cases, those at the table want to see repression and in others they prefer concessions depending not so much on the state’s needs but their personal ones.

According to Pertsev, “a decision to oppose unsanctioned protests if it involves not political but civic issues is not easy for the Kremlin to take.” Often the siloviki do not want to get involved lest they get blamed for the outcome and frequently argue that the politicians should make the decisions about what to do with the demonstrators first.

Consequently, the Meduza analyst says, the decision-making process in the Kremlin about using force or not using force against protesters is far more complicated and far less consistent than many might expect. Sometimes Moscow uses force when it might not have to, and other times it may make concessions that it could avoid making.

And that pattern itself, Pertsev suggests, means that those who try to calculate how they can negotiate from the streets with the powers that be may often obtain results very different from those they have good reason from their point of view to expect.