Kremlin Writes Off Most of Cuba’s $30Bln Debt 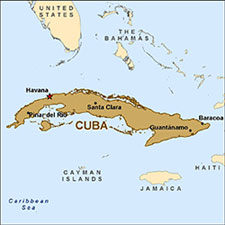 Russia has agreed to cancel most of Cuba’s $30 billion Soviet-era debt ­ the country’s biggest debt cancellation in years, according to an agreement reached during Prime Minister Dmitry Medvedev’s visit to the Caribbean island late last week.

Industry and Trade Minister Denis Manturov, who accompanied Medvedev during his visit to Cuba, said Russia would write off most of its debt to Cuba. The remainder of the debt will be restructured within 10 years.

Both sides announced that they had signed a preliminary agreement and the final one will be concluded in several months.

“We will complete all the formalities by September,” Manturov told reporters Friday.

Moscow’s decision to cancel Cuba’s debt comes in the wake of similar agreements with Afghanistan, North Korea, Iraq, Syria and Libya. Russia has written off a total of $138 billion in debts owed by former clients and allies, according to estimates provided by the Slon.ru news site.

The debt cancellation is a part of a deal under which Cuba will possibly lease Russian civilian aircraft, Manturov said, Interfax reported Friday. Manturov said Cuba will get several Russian planes worth $650 million.

According to the agreement, Russia will provide Cuba with three An-158 planes, three Il-96-400 aircraft and two Tu-204s. The planes will be used by Cuban carrier Cubana, whose fleet almost fully consists of Russian-made airliners. Cuba, which has been under a U.S. embargo since 1961, was once a leading buyer of Soviet equipment. Bilateral trade between the two countries has grown but it accounted for a mere $224.7 million in 2011, according to Industry Ministry data.

Though Medvedev was proudly shown the well-kept graveyards of Soviet military advisers who had been stationed in Cuba, the country’s role as a Soviet military outpost ended in 2001, when President Vladimir Putin closed down the Lurdes signal intelligence facility. The step was seen by many Russian observers at the time as a sign of weakness.

The debt deal will allow the Cuban government to save money in order to focus on economic reforms, experts said. The reforms, pushed by President Raul Castro, legalized small private property and eased travel restrictions.

Medvedev’s meeting with Raul Castro, 82, came ahead of a Cuban parliament session scheduled for Sunday expected to re-elect him for a new presidential term. However, Castro has told reporters jokingly that he might retire, the Associated Press reported Friday.

Medvedev also spent some time with Fidel Castro, Raul’s elder brother and the leader of the Cuban revolution. Medvedev told reporters that he had found Fidel in a “good shape.”

“We spoke for an hour and a half,” Medvedev told reporters in televised comments after the meeting.

The prime minister, who visited Cuba after a trip to Brazil, told reporters during the visit that Russian relations with Latin American countries should not be seen in connection with Russia’s relationship with other regional players, including the United States. He did not elaborate.