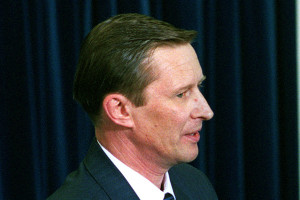 It doesn’t make sense to move the 2018 presidential election to an earlier date, head of the Russian presidential administration Sergey Ivanov has said.

“If you ask my opinion, I see absolutely no sense in this,” Ivanov said in an interview in the Vesti v Subbotu with Sergey Brilev programme on state-owned official Rossiya 1 channel on 20 June.

Ivanov said he had never discussed the subject with the president. “As they say, there are more important things to do,” he said.

Asked whether the presidential election should be brought forward, just like the parliamentary election will be brought forward from December to September 2016, Ivanov said: “So what? Is something terrible going on? Is Putin’s popularity falling sharply? What is all this for?”

“I just see no reason, I simply don’t see it,” Ivanov said.

“And just in case, for the record, as they say, I would like to remind you that Vladimir Putin has all the constitutional rights to stand in the 2018 election,” he said. “And why not?” Ivanov said.

The idea to bring forward the 2018 presidential election was put forward by former Finance Minister Aleksey Kudrin at the St Petersburg International Economic Forum on 18 June. According to Kudrin, this would have allowed the president to enlist the voters’ support and proceed with more serious reforms, so needed in the Russian economy.

Meanwhile, Ivanov supported the idea to bring forward the parliamentary election and described it as “a politically and economically sound proposal”.

“There is a political reason. If we had not changed [the date of the Duma election], in November the old Duma would have voted for the budget, happily waved us goodbye and left with incurring absolutely no responsibility,” he said.

Meanwhile, according to Ivanov, if the new Duma “is elected in mid or late September, it will feel responsible in November and will approach the issue seriously”.

Besides, there is a financial reason, Ivanov said, because money can be saved by combining all elections – municipal and regional.

Ivanov stressed that no decision had been made yet on moving forward the Duma election. “We are waiting for the Constitutional Court’s decision,” Ivanov said.