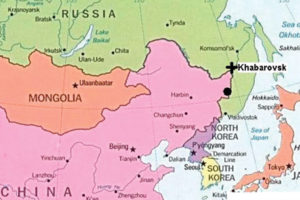 For the 43rd straight day and the seventh straight Saturday, thousands of people came into the streets of Khabarovsk not only to reiterate their demands that their elected governor be restored to office and Putin be ejected from his but also to express their solidarity with opposition leader Aleksey Navalny who remains in a coma.

Calls for the restoration of Furgal remain the most widespread, Elena Beloglazova of SibReal reports, but ever more Khabarovsk protesters are demanding that Putin leave office or even be brought to trial. Some, in reference to the poisoning of Navalny via tea, suggested that “Putin, Drink the Tea!” (sibreal.org/a/30797014.html).

Aleksey Kondratyev, a protest participant, says that everyone knows Navalny was poisoned on orders from above and that this happened because his were among the few media outlets that covered what has been going on in Khabarovsk. “We are required to support him. I hope that Aleksey will make it through this and live.”

A second protester, Vsevolod Mashkov, says that “Putin removes strong leaders … Navalny and Furgal are strong politicians. In the Far East, Furgal’s rating is higher than Putin’s.” And Mashkov’s wife adds “who could have poisoned Navalny if not Putin?” noting that the arrest of Furgal and the poisoning of Navalny are “links in one chain.”

After Putin had his ability to remain president sanctioned by constitutional amendments, the Kremlin leader has become to put in place “real fascism,” Tatyana Mashkova continues. The Kremlin leader wants to send a message that “we are all his slaves.” And he doesn’t care what we or the world thinks.

If the people of Khabarovsk have anything to say about it, Putin may soon have cause to regret that attitude. By showing his contempt for them, he has made them contemptuous of him – and their contempt may mark the beginning of the end of his rule. At the very least, it removes yet another lever the Kremlin ruler has been able to pull in the past.