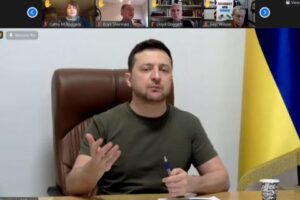 “Ukraine’s president was propelled onto the world stage with Russia’s invasion of his country.”

“President Volodymyr Zelensky of Ukraine was named Time magazine’s person of the year on Wednesday in recognition of his leadership during his country’s war against Russia. The magazine also recognized “the spirit of Ukraine,” pointing to the country’s resilience in a rebuke to President Vladimir V. Putin of Russia. … The Ukrainian leader, who has come to personify the nation’s resistance since Russia launched its full-scale invasion in February, has characterized the war as a struggle by a peace-loving people seeking freedom from tyranny. … “

Click here for: “Zelensky is named Time’s person of the year. Ukraine’s president was propelled onto the world stage with Russia’s invasion of his country.” – New York Times/ Matthew Mpoke Bigg