“Moscow offers to strengthen Russian integration with Minsk in attempt to shore up Lukashenko after unprecedented protests.”

“[Independent online pollsters … reported exit polls giving opposition presidential candidate Svetlana  Tikhanovskaya up to 86% of the recent vote in Belarus.] … Russia moved swiftly to congratulate … Lukashenko for his [officially reported] electoral win and press for stronger ties …. Russia and Belarus are closely linked by language and culture. Belarus[,] once … a Soviet state[,] … is strategically located in the center of Eastern Europe, on Russia’s western flank. … Lukashenko has sought a closer relationship with Europe and the U.S., annoying the Kremlin. … A preliminary count … awarded … [Lukashenko] 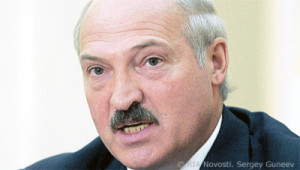 80% of the vote, despite rising anger about … [Belarus’s] struggling economy and a growing list of alleged human-rights violations. … The Belarusian interior ministry reported that some 3,000 people were detained nationwide for participating in unauthorized protests, while 39 law-enforcement officers and more than 50 civilians were injured …. [with the government] den[ying] reports  that one person had been killed. …”

[Lukashenko photo is file photo from another year]