“… Zelensky said a stalemate in the war with Russia was ‘not an option for us’ as he once more appealed for western military support to restore his country’s territorial integrity. ‘We are inferior in terms of equipment and therefore we are not capable of advancing,’ … 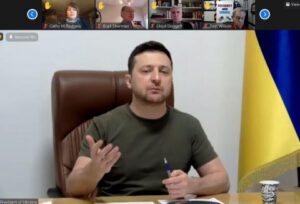 ‘We are going to suffer more losses and people are my priority.’ … The war has entered an attritional phase in the … Donbas …, … focal point of the fighting, with Russia using … superior artillery … to grind down Ukrainian troops and make incremental territorial gains. Zelensky has said Ukraine could be losing up to 100 troops a day. …”

Amidst UN-led talks to free Ukrainian Black Sea ports from a Russian blockade, Zelensky is willing to support a new maritime corridor enabling grain exports from Ukrainian ports as long as Russian ships are not given access. He argued that the sole threat to global food supplies in the matter is posed by Russia, so that dialogue involving Ukraine would not be needed to address the issue.