“Top U.S. and Russian diplomats discussed step-by-step implementation of a 2012 roadmap to U.N.-supervised elections in Syria that could allow a Syrian government ‘to move back into the international community’ … [Ambassador James Jeffrey] said … indicat[ing] a new U.S.-Russian engagement on efforts to end the eight-year Syrian conflict that has killed over 400,000 people …. But Jeffrey cautioned that ‘this is just a potential way forward’ … not[ing] there have been no steps such as a cease-fire in the last rebel-held stronghold in Idlib 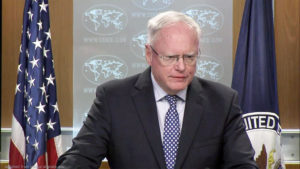 that the Trump administration is demanding or the convening of a committee to draft a new constitution … as called for in the roadmap. …”