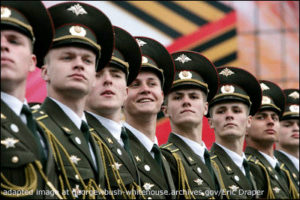 “… on the one hand, senior Russian officials, including the president, are publicly declaring the existence of a range of advanced new weapons systems, while on the other hand, spending plans suggest that the defense burden should decline into the early 2020s. … While official rhetoric in relation to military modernization – and in particular to the development of new strategic-weapons systems – might appear alarming to some observers …. [g]iven existing economic constraints, and the leadership’s desire to avoid incurring the costs of an excessive military build-up, defense-industrial production on a scale commensurate with an arms race is simply out of the question. While Russia is likely to feel more confident in its ability to defend itself, to assert its interests near its own borders, and to deploy relatively small-scale forces abroad, it will remain a long way from possessing the ability to overwhelm larger, better equipped peer competitors.”