JRL NEWSWATCH: “Russians Join Calls Urging Turkey Not to Revert One of Christendom’s Most Famous Churches into a Mosque” – CNS News/ Dimitri Simes

“Russian lawmakers adopted a resolution … calling on Turkey not to change the status of Istanbul’s famed Hagia Sophia from … museum to … mosque, warning that Russia’s … relations with Turkey could be harmed …. Hagia Sophia was the seat of the Eastern Orthodox Church for nearly 900 years before being turned into a mosque in the 15th century. Ataturk in a 1934 decree declared it a museum. Calls by Turkish Islamists and nationalists to revert the landmark’s status back to that of a mosque are not new, but last year … 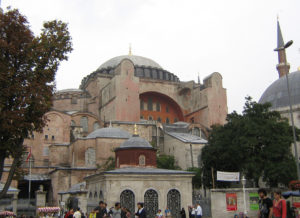 Erdogan pledged to do so while campaigning for re-election. …”

Click here for: “Russians Join Calls Urging Turkey Not to Revert One of Christendom’s Most Famous Churches into a Mosque” – CNS News/ Dimitri Simes