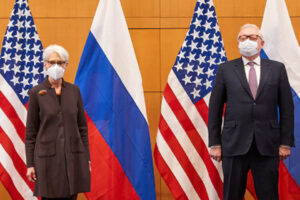 “… Ryabkov said Thursday that Moscow couldn’t exclude dispatching ‘military infrastructure’ to Venezuela or Cuba if tensions with Washington — which have soared in recent weeks over a huge buildup of Russian troops on Ukraine’s border — continue to rise. … Last month, [] Ryabkov told reporters that he couldn’t exclude the possibility that relations between Russia and the U.S. could end up in a situation similar to the Cuban Missile Crisis of 1962. … Ryabkov also said Thursday he sees no immediate grounds for fresh talks with the U.S., after several rounds of negotiations this week yielded little progress in defusing the crisis in Ukraine. …”