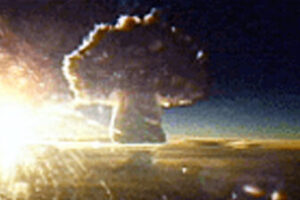 “[Igor Vishnevetsky, deputy director of the Russian Foreign Ministry’s nonproliferation and arms control program,] on Tuesday twice repeated … Putin’s new message that ‘a nuclear war cannot be won and must never be fought,’ apparently trying to roll back on Putin’s warning after the Ukraine invasion that Russia is a ‘potent’ nuclear power and any attempt to interfere would lead to ‘consequences you have never seen.’ Putin’s comment then dramatically escalated global tensions … [and] days later … he ordered Russian nuclear forces put on high alert.

[Vishnevetsky made the statements to an international] conference to review the … Nuclear Nonproliferation Treaty …. Secretary of State Antony Blinken … [on] Monday[] … called Putin’s warnings after the Ukraine invasion ‘reckless, dangerous nuclear saber-rattling.’ …”