JRL NEWSWATCH: “Meet the Ministry of Enlightenment; Reformists and traditionalists are at war over Russian schools; Is teaching a ‘divine calling’ to support the state, or is about preparing students for the future?” – The Economist 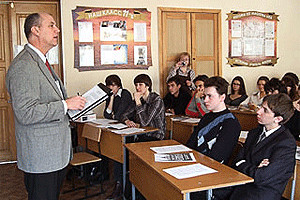 “… Russia has a strong crop of teachers … [and] a talented and well-educated population. Over 55% of working-age adults have degrees. Student performance in international tests has been rising steadily; Russia now scores around the average for OECD countries. Yet years of under-financing-the government spends just 3.6% of GDP on education – and an archaic curriculum have left the system struggling to prepare children for the modern world. … as … Putin enters his fourth term promising to turn his attention to domestic issues, education has become an ideological battleground. … break[ing] down into two main camps, traditionalists who favour teacher-centric direct instruction and progressives who favour student-centred experiential instruction. … Neither group has won yet. … the Ministry of Education and Science will be split into two ministries, one for higher education and science and another for primary and secondary education. …. “

Click here for: “Meet the Ministry of Enlightenment; Reformists and traditionalists are at war over Russian schools; Is teaching a “divine calling” to support the state, or is about preparing students for the future?” – The Economist

[featured image is file photo (featuring Russian students and a U.S. diplomat in a Russian classroom)]