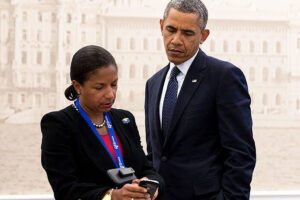 “As … Trump began his meteoric rise … the Obama White House summoned Ukrainian authorities to Washington …. Ukrainian participants said it didn’t take long … to realize the Americans’ objectives included two politically hot investigations: one that touched … Biden’s family and one that involved a lobbying firm linked closely to then-candidate Trump. … [O]ne of the earliest documented efforts to build the now-debunked Trump-Russia collusion narrative … one of the first to involve the Obama administration’s intervention.

… * * * Politico reported that the Ukraine Embassy in Washington assisted Clinton’s campaign through a DNC contractor. The Ukraine Embassy acknowledges it got requests for assistance from the DNC staffer to find dirt on Manafort but denies it provided any improper assistance. Now we have more concrete evidence that the larger Ukrainian government also was being pressed by the Obama administration to help build the Russia collusion narrative. And that onion is only beginning to be peeled. But what is already confirmed by Ukrainians looks a lot more like assertive collusion with a foreign power than anything detailed in the Mueller report.”

Click here for: “How the Obama White House engaged Ukraine to give Russia collusion narrative an early boost” – The Hill/ John Solomon