JRL NEWSWATCH: “Europe Needs a Strategy for Russia After Putin; Competing ideas about the end state of the war are striving for dominance” – Foreign Policy/ Bart M. J. Szewczyk 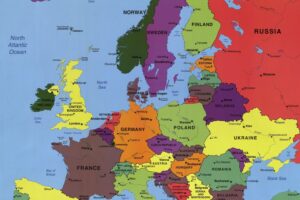 “As defense ministers of NATO and other nations met … and tried to resolve … divisions over supplying Ukraine with the heavy weapons it needs to drive Russian forces out of its territory … there are very different visions of the end state of the war and the region’s future. Among European countries, especially, there are stark differences … [with] at least three camps of thought …. The first … seems to believe it can turn back the clock when the war is over. … A second camp among NATO allies wants to ensure that Ukraine wins and Russian war crimes are prosecuted. … A third, barely voiced but emerging view is that Europe will only be fully safe if Russia itself is transformed. … [After his] senseless, brutal, and unsuccessful war of aggression, Putin is unlikely to survive it in power. European leaders should prepare for this eventuality and … look[] for a successor they can do business with. … [P]rimarily[] they need to step up their efforts to help Ukraine win.”

Click here for: “Europe Needs a Strategy for Russia After Putin; Competing ideas about the end state of the war are striving for dominance” – Foreign Policy/ Bart M. J. Szewczyk

Europe Needs a Strategy for Russia After Putin