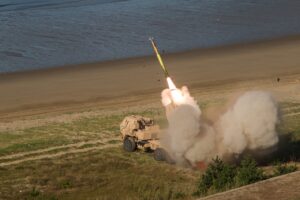 “Give us the tools and we’ll finish the job, says Oleksii Reznikov.”

“Under a new commander Russian forces are exploiting Ukraine’s inferiority in artillery, multiple-launch rocket systems and aviation. … If the news appears grim for both sides, it is worse for Ukraine. Returning soldiers talk of chaotic command and depleted ammunition. Inexperienced, young soldiers from volunteer units are sent to the front lines to replace fallen comrades. … Ukraine now needs Western help to stop the onslaught, and it is not coming fast enough. In some areas Russian forces have ten times the Ukrainians’ firepower. Multiple-launch rocket systems are in the pipeline, due to arrive ‘soon … perhaps in a week, perhaps two.’ But Ukraine needs them in large numbers, and whether or not its allies agree to send them may depend on how Russia reacts to their deployment. Western military chiefs have also expressed concerns that Ukraine may not be able to absorb the new hardware as fast as it would like. …”

Click here for: “Europe must arm Ukraine faster, urges its defence minister; Give us the tools and we’ll finish the job, says Oleksii Reznikov” – The Economist