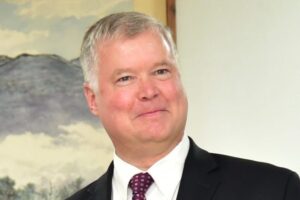 “Deputy Secretary of State Stephen Biegun [was in Lithuania,] signal[ing] a greater U.S. role … trying to settle … strife … erupt[ing] when Belarussian President Alexander Lukashenko cracked down on peaceful protesters … reject[ing] his claim of a landslide election victory [claiming it was rigged]. … Asked about possible Russian military intervention … [Biegun] said: ‘Of course that would be most unwelcome, but we don’t have any indication beyond some … public remarks ….’

He … [met] [currently exiled] Sviatlana Tsikhanouskaya, [who had been] the main [Belarusian] opposition candidate …. “We urge the government of Belarus to accept the OSCE chair’s offer to facilitate dialogue and engage all stakeholders,” Biegun told a conference …. ‘The United States cannot and will not decide the course of events in Belarus, this is the right of the Belarusian people.'”