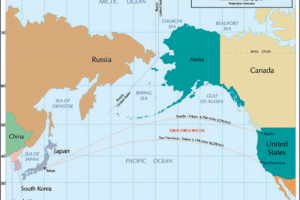 “Russia has escalated its provocative encounters in the North Pacific this year, harassing boats in U.S. fishing waters and sending bombers toward Alaska’s shores.”

“The crew … was laying out … long cod-catching line well within U.S. fishing territory in the Bering Sea when a voice crackled over the … radio … issuing commands: The ship was in danger, it said, and needed to move. … [W]arnings … in a mixture of Russian and accented English from a plane buzzing overhead, grew more specific and … urgent. There was a submarine nearby, the voice said. Missiles were being fired. Leave the area. Other U.S. fishing vessels … scattered over 100 miles of open sea were getting similar messages. … [T]hree Russian warships came barreling through, barking orders of their own. … [C]ommands from a Russian plane led … [another ship’s captain] to contact the U.S. Coast Guard, wondering how to protect his crew ….

Click here for: “‘Are We Getting Invaded?’ U.S. Boats Faced Russian Aggression Near Alaska; Russia has escalated its provocative encounters in the North Pacific this year, harassing boats in U.S. fishing waters and sending bombers toward Alaska’s shores.” – New York Times/ Mike Baker

Follow Johnson's Russia List's board Russia Politics on Pinterest.
[sponsored ads disclosure:] amazon and google ads or links are, indeed, advertisements; amazon purchases result in (relatively small) commissions through the "amazon associate" program, in which the web producer is a participant
%d bloggers like this: