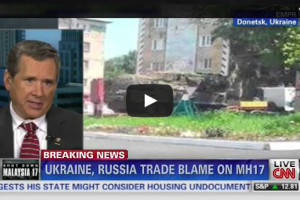 “An order to issue a universal broadcast license to CNN has been signed,” he noted.

The newspaper Izvestia said earlier that CNN International had received a universal broadcast license from Roskomnadzor.

A CNN representative confirmed to the newspaper that a ten-year license was issued on March 23.

In turn, Roskomnadzor chief Alexander Zharov told Izvestia that CNN had been actually issued a license.

“I welcome CNN’s strict compliance with the agreements reached at the negotiations and believe that their content policy will be equally precise and impeccable,” Zharov said.

CNN applied for a universal broadcast license to Roskomnadzor on February 17. Back then Ampelonsky told Interfax that the service had 30 days to process the application but “most probably, a decision would not take so long.”

The European office of Time Warner Concern notified Russian cable operators in November 2014 about the intention to stop CNN broadcast in Russia in 2015. The news channel was founded by Ten Turner in 1980. It was one of the first in the world to begin operation 24/7.

The CNN office in Russia opened in 1983, and the channel started airing its programs in the country in the early 1990s. As of late, its broadcast was limited to cable and satellite channels lately.

CNN did not receive a broadcast license in Russia earlier but the national authorities had no objections to the airing of its programs. Roskomnadzor said it had nothing to do with the CNN decision to halt the broadcast in Russia.