MOSCOW. Oct 31 (Interfax) – The latest events in Moscow’s Biryulyovo district show that only the forces seeking to destroy Russia will gain from further disregard of the opinion of the Russian majority, said Patriarch Kirill of Moscow and all Russia.

“The latest clashes in the Moscow Biryulyovo district demonstrated that a deaf ear turned by the authorities to the demands of people and the unwillingness to search for joint solutions to the problems of excessive migration, related crimes and the behavior of foreigners, which is sometimes impudent, are bringing the situation to a critical limit,” the Patriarch said at the opening ceremony of the 17th session of the World Russian People’s Council.

“If the position of the Russian majority is ignored further, only the forces seeking to destroy Russia and provocateurs on both sides, which never stop trying to set ethnoses and religions against each other, will gain from that,” the patriarch said. 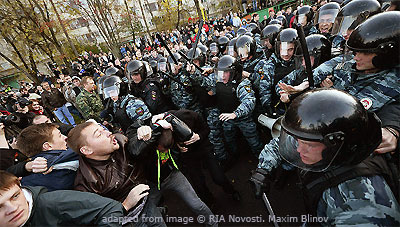