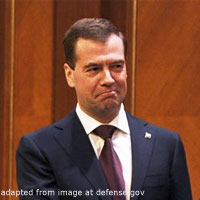 “It is important to correctly use the opportunities provided by WTO membership, to use the allowed mechanisms and procedures to furthest possible extent, including the WTO dispute settlement body,” he said at a conference devoted to the Russian membership in the WTO on Tuesday.

Claims have been made against Russia, but Russia “should also be prepared to initiate relevant negotiations,” he stressed.

“In fact, the WTO operates by this principle: you are kept down if you do not resist. Just as it happens in the world at large,” the prime minister said.

Whenever well-founded or unfounded claims are made against Russia, the country must be prepared to respond and make claims of its own, the Russian prime minister said.

“Certainly, negotiations should be held whenever that is necessary and justified, and all pros and cons should be evaluated. It is our primary objective to eliminate unreasonable trade restrictions imposed on Russia,” Medvedev said, adding that in certain cases the restrictions were applied in breach of WTO rules.

Some of them directly affect the interests of Russian investors and exporters, the premier stressed.

“Obviously, the work inside is somewhat more difficult than negotiations held on Russia’s accession [to the WTO], which, by the way, were not easy and held for a very long period of time, 17 years. Yet the work [within the organization] is even more complex,” Medvedev said.