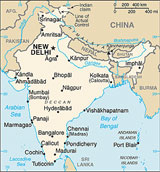 Indian Premier Manmohan Singh’s October 21–22 visit to Moscow not only reaffirmed traditional Indo-Russian amity, it also revealed significant trends in Asian developments that affect both parties as well as other key players like the United States, China and Pakistan. In some respects, the deal failed to resolve a number of outstanding issues—for instance, there was no accord on the construction of two more nuclear reactors at Kundukulam, in the Indian state of Tamil Nadu (Daily News and Analysis Online, October 23). Yet, there were some new agreements on Russian defense and technology transfer. India received the completed Trikand frigate built in Russia, an order of T-90S tanks, the bedeviled but apparently finally completed INS Vikramaditya aircraft carrier, and a license to produce in India the Su-30MKI naval aircraft fighter. As the two governments’ joint statements indicated: progress was also made in the joint design, development and production of high-technology weapons such as the Brahmos supersonic missile, a fifth generation aircraft fighter, and multi-role transport aircraft, as well as cooperation in rocket, missile, and naval technologies and weapons systems (ANI, India Press Information Bureau Online, October 21). India may also take possession of a second nuclear-powered submarine on lease from Russia to boost its submarine capabilities (The Times of India Online, October 21).

Arguably, however, arms sales were not the summit’s main or most interesting results. Indeed, some Indian media remain highly critical of defective Russian equipment as revealed in the whole sorry saga of the Vikramaditya carrier (Siassat, October 23; see EDM, November 30, December 7, 2012; March 22, 2013). And India’s recent agreements with the US will probably help it indigenize defense production to a much greater extent than Russia even though Singh laid out technology transfer and co-production as a condition of future arms sales (Deccan Herald Online, October 19; Prime Minister of India, October 21). Consequently, the trend that Russia now faces—of ever greater competition from other producers—will not be reversed, and India will continue to diversify its defense imports.

As expected, there was considerable discussion of the meager amount of Indo-Russian trade: just $11 billion in 2012, even though that is a record amount (pmindia.nic.in, October 21). But also of consequence for their bilateral ties are energy issues. In particular, India announced its willingness to again consider a direct natural gas pipeline from Russia (and through Central Asia) and set up a joint Indo-Russian study group to think about realizing this vision (The Indian Express Online, October 20). Beyond that, India’s national energy company ONGC Videsh wants to prospect Arctic hydrocarbons jointly with Russia (Interfax, October 21). These announcements underscore the continuing highly precarious Indian energy situation and India’s determination to not be left behind in the opening scramble for resource prospecting in the Arctic.

Furthermore, New Delhi’s announcement of interest in a direct pipeline from Russia shows India’s mounting anxiety about the so-called TAPI (Turkmenistan, Afghanistan Pakistan, India) gas pipeline, which is a poster child for the US Silk Road project for the wider region. Yet, despite the agreement of all the principals regarding this pipeline’s importance, financing has not yet materialized—clearly a vote of no confidence in Afghanistan’s future. This situation leaves India and Pakistan, literally, out in the cold. And Russia is all too ready to exploit this state of affairs. Indeed, immediately after his summit with Prime Minister Singh, President Vladimir Putin announced that Russia also seeks to implement major energy projects with India’s arch-rival, Pakistan (Interfax, October 23).

Neither were these remarks on energy the only signs of Indian apprehensions that the US withdrawal from Central Asia leaves it in the lurch. Indeed Singh, in his formal speech to the Moscow State Institute of International Relations (MGIMO), openly announced that Central Asian trends were obliging India to gravitate more closely to Russia (pmindia.nic.in, October 21). At the same time, Russia and India also both lambasted Pakistan for its support of terrorism and indicated a desire to cooperate more with regard to Afghanistan and Central Asia, in general (India Press Information Bureau, October 23). Thus, in anticipation of chaos once US and Western forces leave the region, and fearing New Delhi’s abandonment by Washington, Singh is already moving India closer to Russia. Finally, India’s subsequent agreement with China on border defense shows that while New Delhi will defend its borders, it will eschew confrontation with Beijing even though China is clearly elbowing India out of Central Asia whenever it can do so.

But perhaps the most astonishing outcome of the Russian-Indian summit is that Singh told Putin—who subsequently revealed this at the Supreme Eurasian Economic Council summit on October 24—that India is ready to consider signing a free trade agreement with the Customs Union—a forerunner of Moscow’s pet project, the Eurasian Union (kremlin.ru, October 24). In 2012, Secretary of State Hillary Clinton called this project an effort to re-Sovietize the former republics of the Soviet Union and announced that Washington was seeking ways to counteract this (see EDM, December 10, 2012). Yet, the statement about India’s interest in participating points to another sign of the utter breakdown of US policy in Central Asia and New Delhi’s corresponding need to find other, more reliable partners—which may be a cold wake-up call to Washington policymakers, if they take notice of these trends.